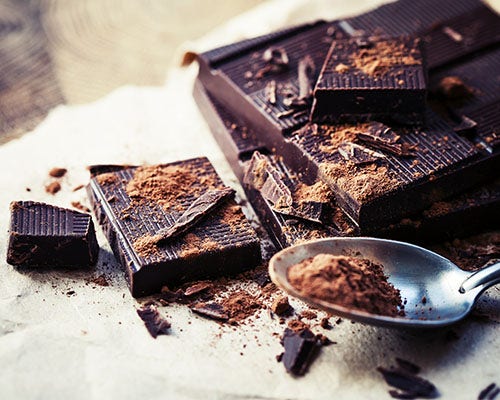 [vc_column css=".vc_custom_1523974098856{margin-top: -40px !important;padding-right: 0px !important;padding-left: 0px !important;}" el_id="text-content"][vc_column_text]Chocoholics everywhere no longer need to feel guilty indulging in their beloved sweet treat every now and then, as studies show that chocolate has many great benefits to health! Specifically, research has found that the true benefits are from eating dark chocolate which contains at least 70 percent cacao, full of antioxidants and flavonoids. Most experts agree that the recommended daily "dose" of dark chocolate is approximately 1-2 ounces (a couple of squares of a standard-size bar).

So go ahead and get that bar of dark chocolate, but remember—moderation is still the key to avoid excess calories and fat. Enjoy a square or two today!
#Chocolate , #Antioxidants , #Healthy Eating