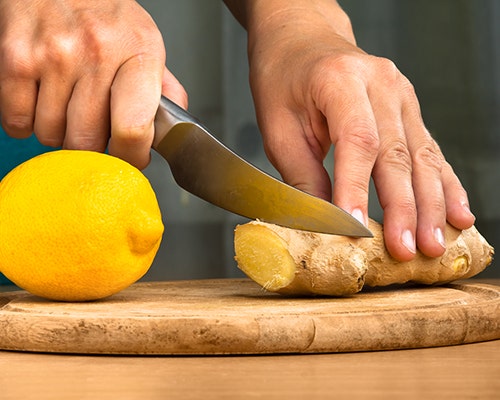 Zesty and aromatic, ginger adds as much to meals and treats as it does to your overall health. This remarkable root can offer a world of healing benefits and has been used in medical traditions all over the globe for centuries. And now, modern medicine is catching up and catching on to the incredible health benefits of this tasty superfood. Ginger’s medicinal magic is rooted in its bioactive compounds, especially gingerol, which give it its enormous antioxidant and anti-inflammatory powers. Widely available as fresh, dried, powdered, pickled, capsules, chews and teas, ginger is delicious in a wide array of dishes, from spicy stews to healthy smoothies and sweet gingerbread cookies. So get to the root the many ways that ginger is good for your body and brain.

Do you remember being given ginger ale as a kid to help ease an upset tummy? Your parents were clearly onto something because people have reached for ginger for its stomach-calming abilities since ancient Chinese times. Today, many people depend on ginger to soothe nausea due to pregnancy, chemotherapy, surgery and motion sickness. The next time you’re feeling queasy, try steeping a cup of ginger tea, grab an all-natural ginger ale or chew on some crystallized ginger to help settle your stomach for good.

Whether you’re dealing with muscle strain after a workout or feeling the discomfort of arthritis, ginger may be able to take the ache away. As one of nature’s strongest anti-inflammatories, ginger suppresses the inflammation that’s causing your soreness and stiffness in the first place, while also turning off your body’s pain-causing compounds. As a result, a dose of ginger is a natural alternative to pain pills to prescriptions.

Today, inflammation is the cause of many serious health conditions, from heart disease and cancer to autoimmune disorders. But thanks to the anti-inflammatory effects of its potent compound gingerol, ginger has been shown to help block this inflammation all throughout your body. As a result, it’s only natural to reach for this healthy remedy to stop inflammation from starting.

High blood pressure is high on the list of serious health conditions that raises your risk for chronic diseases. While doctors far too often prescribe blood pressure medications, studies have found that ginger can lower your blood pressure more naturally. Ginger works by opening up your blood vessels, which makes it much easier for your heart to pump blood through your body and brings down your overall blood pressure.

Remember ginger’s strong antioxidant and anti-inflammatory powers? These give ginger its remarkable ability to help fight off the inflammation that leads to cognitive disorders, such as Alzheimer’s, Parkinson’s and dementia. Not only do ginger’s antioxidants help reduce the inflammation that leads to cognitive decline, they have also been shown to enhance your brain function and improve your memory as you age.

So when you’re craving better health, start spicing up your meals and your life with ginger.