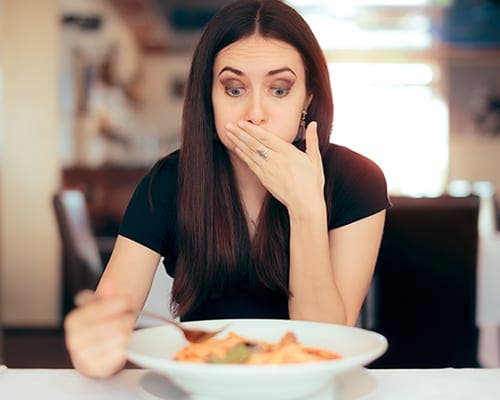 From restaurants to grocery stores, the market for foods that cater to various dietary restrictions is now quite expansive in most areas of the country. “Gluten-free” or “lactose-free” options of everyday foods are becoming more the norm than the exception. However, this plethora of choices can also make it confusing for someone who may experience mild symptoms of discomfort after eating certain foods – but aren’t sure where they might fall on the “sensitivity” spectrum. Are symptoms like upset stomach and diarrhea following a meal indicative of an “allergy” to a certain food, or just “intolerance”? While these terms are often used interchangeably, there are some significant differences that are important to know.

The immune system vs. the digestive system

The main difference between food allergies versus sensitivities is the body’s actual response to the food stimuli, according to Healthline. With food allergies, the immune system elicits a response in the body, perceiving the food as a “threat”. This can trigger mild symptoms like itching and hives, to more serious reactions like swelling, dizziness, or even anaphylaxis (which can be fatal).

Food sensitivity and intolerance, on the other hand, trigger reactions in the body’s digestive system and are not potentially life-threatening. Symptoms may include bloating, gas, diarrhea, constipation, cramping, and/or nausea.

According to the Centers for Disease Control and Prevention, food allergies are estimated to affect 4% – 6% of children and 4% of adults. While most common in babies and children, allergies can develop at any age, and can even begin suddenly after eating a food for years without reactions.

Over 160 foods may contribute to allergic reactions, yet the FDA identifies 8 of the most common that comprise 90 percent of allergies. These include:

While the majority of food-related symptoms occur within two hours of ingestion, they can even begin within minutes (often the case in severe reactions). Very rarely, reactions may be delayed by four to six hours or more, says the American College of Allergy, Asthma & Immunology.

The Food Allergen Labeling and Consumer Protection Act of 2004 (enforced by the FDA) requires identification of the top allergen ingredients for food products. However, it is very important to carefully check labels, as they may not be explicitly marked. For instance, a label may say contains “lecithin (soy)”, putting the potential allergen ingredient in parenthesis rather than listed first. It is important to note that labeling regulations do not apply to foods controlled by the U.S. Department of Agriculture (like meat, poultry and eggs), nor beverages regulated by the Alcohol and Tobacco Tax and Trade Bureau (like spirits, wine, and beer). Health and beauty products are also excluded, such as cosmetics and shampoos, which might contain allergens like nut extracts or wheat proteins.

Unfortunately, food allergies cannot be cured, and only awareness of symptoms and subsequent avoidance of certain foods can help eliminate the risk. The American College of Allergy, Asthma & Immunology says that food allergies typically are genetic, but this may not always be the case. An allergist can determine specific allergies via skin tests and/or blood tests. Oral food tests (which include monitoring under medical supervision) may also be used. Dieticians and nutritionists may also be helpful resources.

While food intolerance and sensitivity may not be life-threatening like a food allergy, the symptoms can nevertheless be uncomfortable.  In addition, food sensitivity and intolerance can be difficult to determine at times because sometimes foods may be consumed in small quantities without triggering a reaction, suggests WebMD.

As reported by WebMD, some potential causes of food intolerance or sensitivity may include insufficient natural digestive enzymes (common in people without a gallbladder, for instance), certain health conditions (like Celiac disease or irritable bowel syndrome), sensitivity to additives (such as MSG or sulfites), or even psychological factors (such as a negative predisposition towards certain foods).

Fortunately, people with sensitivities may still be able to enjoy foods they love with the help of digestive enzymes, or by choosing foods especially formulated to be free of symptom-triggering ingredients like lactose and gluten. However, it is important to exercise caution and be mindful of changes in food reactions, as they may develop into a more serious food allergy which may require medical evaluation and treatment.