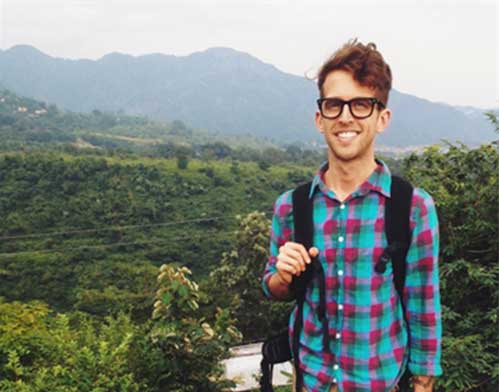 [vc_column css=".vc_custom_1502134007142{padding-right: 0px !important;padding-left: 0px !important;}"][vc_column_text el_id="text-content"]Just over one month ago, I embarked on my fifth journey half-way around the world to the country of India. I have been going ever since I was nineteen to visit friends and to help out in a small community that is nestled right next to the foothills of the Himalayas.

On this particular journey, I was able to team up with a group of individuals my age and play music in a program that visited different public schools in the city. We would wake up early and would play by lunchtime.

Playing music in a different country is quite the experience. While you may be used to a perfect sound system in the US, we would usually have to suffice with a single speaker; even a piano without a sustain pedal. However, the feeling you get playing with new friends is more exhilarating than anything I could have ever imagined. While language could sometimes be a barrier (even though everyone spoke amazing English) the bond that can be created through music is mind-blowing. Most of the schools that we played had students packed into their courtyards-sometimes numbering up to eight-hundred children. Even though I have played more shows than I can count in the US, most of these shows were close to some of the biggest I had ever been a part of, and the most meaningful.

My second week was filled with a three-day trek into the Himalayas to visit a family in a remote village far from civilization. The trek was quite treacherous due to the season and nutrition while traveling can be just as iffy.  I was thankful to have a variety of my favorite Garden of Life food bars and packets of Raw Protein to help keep me fueled for my days on foot through the city and the mountains.

India’s seasons coincide with the US, however weather changes in higher elevations can happen quickly.  Anyone planning to trek into the higher elevations have to watch the cloud formations closely because they can be filled with rain and snow that can make conditions dangerous on foot.  We were lucky to have a day that saw the weather clearing, so my friend Mo and I embarked on a two-hundred mile trip to a small city named Mori-the last city on the “road” before sheer remoteness takes over. While cell-phone use and service was far past disabled, we went through mountainous highways with no guard rails, pine jungles and green, lush valleys cut between gargantuan mountains.

After seven hours in Mo’s car, we had to park at the entrance to one of the many wildlife reserves. I registered my passport with the guard (perhaps in case I did not return) and we packed into what should be a six-passenger vehicle filled with thirteen to fourteen folks. It was driven by a village local who knew the ways around the rough road filled with boulders. The driver would be the one most trusted who wouldn't throw the vehicle careening over the cliff. After forty-five minutes squished up against the door of the truck, we were dropped off at the path which would lead us to the friend’s home. The only thing that separated us was an hour hike on a trail that was solely lit by the thousand stars that filled the sky.

The entire excursion was by far the most grueling and challenging thing I have ever embarked upon. Yet as anything that comes with a challenge, the payoff was mind-blowing. We woke up to a river coursing through the valley with a view of green mountains warming up to a fireball sun.

I will never forget this trip to India, which has now become my fondest memory. It just goes to show, our world is bigger than we could imagine and there are so many more things we can jump into that will make our minds grow, keep us challenged and get our hearts beating to the rhythm that has made all of us voyagers.