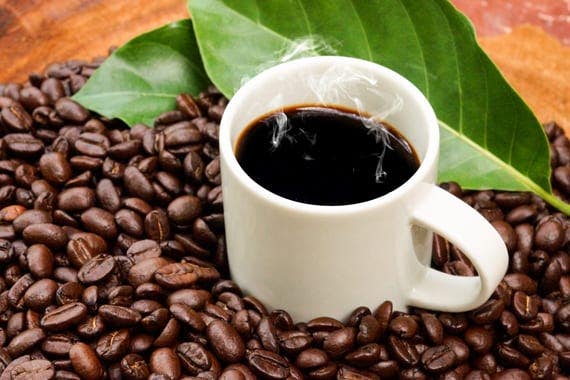 [vc_column css=".vc_custom_1501871231390{padding-right: 0px !important;padding-left: 0px !important;}"][vc_column_text el_id="text-content"]It’s been estimated that around 60% of Americans over the age of 18 report that they are “regular” coffee drinkers. No doubt what most motivates this consumption is the familiar and dependable lift that coffee provides.

What may be less familiar to us consumers of this popular beverage is the ever-widening base of information that reveals some significant health benefits associated with this drink.

According to the Harvard School of Public Health, coffee consumption has been associated with a reduced risk for the development of type 2 diabetes (T2D). T2D is characterized by elevation of blood sugar and that can have implications for any and all parts of the body. From my perspective as a neurologist, T2D is thought to actually double a person’s risk for the development of Alzheimer’s disease. More on that in a moment.[vc_column_text]Harvard also reports that regular coffee consumption could lower the rate at which liver cancer progresses, may help prevent gallstones,is not harmful with respect to heart attacks or strokes, and may well be associated with a reduced risk of developing Parkinson’s disease, a movement disorder now diagnosed in about half a million Americans.

To be fair, there are some possible downsides. Women who are consuming high amounts of caffeine may be at increased risk for miscarriage or stillbirth. And caffeine can raise blood pressure and heart rate.

Aside from reducing risk for T2D and its implications for dementia, there may well be other mechanisms at play with respect to coffee’s ability to protect the brain. Researchers presenting data at the Alzheimer’s Europe annual conference in Glasgow have studied the risk of developing dementia in a group of adults over a four-year period. They found that those who consumed three to five cups of coffee per day had about a 20% less chance of developing dementia. Their research revealed that the brains of the coffee drinkers actually showed less development of amyloid plaques, a hallmark of Alzheimer’s disease.

Their conclusions focused on the role of chemicals in coffee called polyphenols, which function as protective antioxidants and are known to favorably impact the gut bacteria. Caffeine itself is known to have some direct and positive effects on the brain, which may also play a role.

Dr. Iva Holmerova serves as vice chairman of Alzheimer Europe. She commented on the research stating: "The findings presented in this report are very encouraging and help to develop our understanding of the role nutrition can play in protecting against Alzheimer's Disease. Coffee is a very popular beverage enjoyed by millions of people around the world, and I'm pleased to know that moderate, lifelong consumption can have a beneficial effect on the development of Alzheimer's Disease."[vc_row_inner][vc_column_inner width="1/4"][vc_single_image image="73" img_size="medium" alignment="center"][/vc_column_inner][vc_column_inner width="3/4"][vc_empty_space height="5px"][vc_column_text]About Dr. Perlmutter: David Perlmutter, M.D., is an expert in the human microbiome, a board-certified neurologist, Fellow of the American College of Nutrition, America’s brain-health expert and #1 New York Times best-selling author.[/vc_column_inner][/vc_row_inner][vc_column_text]This information is intended for educational and informational purposes only. It should not be used in place of an individual consultation or examination or replace the advice of your health care professional and should not be relied upon to determine diagnosis or course of treatment.
#Dr. Perlmutter , #brain health , #Diabetes