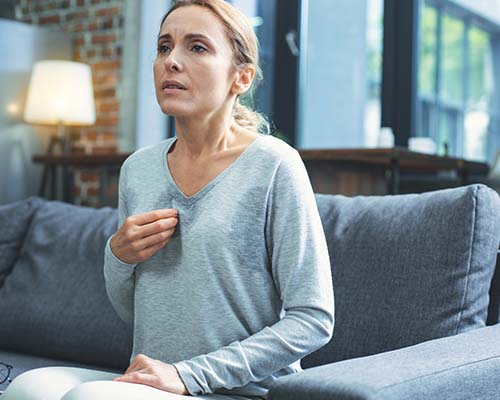 Nearly everyone has at one time or another dealt with anxious sweating, such as during an interview, giving a big presentation or other stressful situation. Sweaty hands and underarms during such circumstances may undoubtedly be unpleasant but can be expected. This type of sweating is temporary for most people and does not have a lasting impact on everyday life. Unfortunately for those suffering from hyperhidrosis, excessive sweating is not limited to isolated nerve-wracking situations but is instead a constant daily struggle.

According to WebMD, hyperhidrosis (aka excessive sweating) is a relatively common condition which afflicts an estimated 2%-3% of Americans. This percentage may even be higher, as people may be embarrassed to seek medical treatment for their condition.

Hyperhidrosis can cause extreme sweating of the underarms, palms of the hands, the soles of the feet, and even the head. While sweating during certain activities is normal – such as while exercising or during physical exertion, spending time in a hot environment, or under stressful circumstances – hyperhidrosis occurs without an obvious cause and can negatively impact daily living.

Symptoms of hyperhidrosis can include sweat-soaked clothing, visible perspiration even while at rest, or dripping hands, according to the Mayo Clinic. As a result, this sweating can negatively affect both personal and professional relationships, and seriously impact self-esteem. It can also make everyday tasks difficult, such as holding a pen, or even be potentially dangerous, like being unable to firmly grip a steering wheel or a handrail, suggests WebMD. Further, continuously damp skin can lead to skin infections such as Athlete’s foot and jock itch, reports the American Academy of Dermatology. Hyperhidrosis can also have serious consequences on one’s emotional state, leading to a decline in social, academic, or career pursuits.

Hyperhidrosis typically begins to present noticeable symptoms in childhood and early adolescence. Over-activity of the sympathetic nervous system is believed to be responsible for most people afflicted, according to health care specialists at the University of California San Francisco Medical Center. The sympathetic nervous system controls sweating throughout the body, usually leading to sweating due to reasonable and understandable causes (such as stress, environment, etc.). However, people with hyperhidrosis appear to have constant increased activity of this system, which thus leads to excessive sweating, according to UCSF Health.

MedlinePlus further notes that hyperhidrosis specifically may be linked to overactive sweat glands, or may have a genetic link. Excessive sweating of particular areas of the body, such as the hands, feet, forehead, and armpits, is referred to as primary or focal hyperhidrosis. While undesirable for obvious reasons, this type of hyperhidrosis tends to occur in people who are otherwise healthy.

Excessive sweating may also be caused by other medical conditions, which is known as secondary hyperhidrosis. Examples of such conditions include but are not limited to anxiety, certain types of cancer, glucose control disorders (such as diabetes), obesity, heart disease, over-active thyroid, menopause (hot flashes), Parkinson’s disease, nervous system disorders, and more, according to Mayo Clinic and MedlinePlus.

Excessive sweating can also result as a side effect of various medications, or even substance abuse. It may also begin following traumatic injury, such as following an accident. Secondary hyperhidrosis may occur only during sleep, and may cause the entire body to sweat. It also tends to begin in adulthood, often as a result of comorbid conditions, says the American Academy of Dermatology.

In rare cases, excessive sweating can also be an early warning sign of a serious condition such as a heart attack, according to the Mayo Clinic. It is advised to seek professional medical care right away if unusual sweating is accompanied by lightheadedness, chest pain, or nausea.

How to Cope with Hyperhidrosis

Most physicians will run some basic lab work such as blood or urine tests to rule out underlying health conditions which may be causing hyperhidrosis. There are also very specific “sweat tests” which can determine the severity of each individual’s condition. These tests may include an iodine-starch test, skin conductance, and/or a thermoregulatory sweat test. If a causal source is determined, treatment can begin based on the findings. If there is not a noted specific cause, other treatments can still be utilized to help minimize the sweating and resume normal life.

Typical treatments may include prescription antiperspirant or creams, nerve-blocking medications, or Botox, says the Mayo Clinic. Cornstarch and baking soda are some common natural remedies for excessive sweating. Depending on the severity, a combination of treatment methods may be needed. In rare cases, surgery may be a last resort.