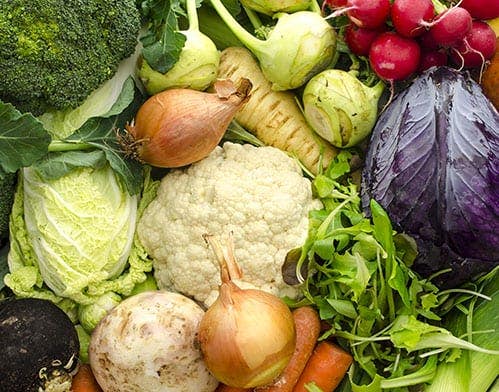 Here’s one more reason to choose organic: non-organic food crops are often sprayed with pesticide chemicals that are fluoride based—causing some non-organic produce to contain up to 180 times the amount of fluoride in tap water, according to fluoride expert Jeff Green.

For example, cryolite (sodium hexafluoroaluminate) is a commonly used fluoride-based pesticide, and it’s used because—like other fluoride-based pesticides—it is thought to be effective at killing pests and helping to avoid pest damage to crops. Unfortunately, these crop chemicals also have staying power in and on produce that consumers regularly eat. In fact, Green estimates that approximately one-third of the average person’s fluoride exposure is due to consuming non-organic foods grown with fluoride-based chemicals.

Some specific examples of foods that are by law permitted to have certain levels of sodium aluminum fluoride include: citrus fruits (allowed to be contaminated with up to 95 parts per million, or ppm); potatoes (allowed to have up to 22 ppm on the outside skin and 2 ppm on the inside flesh); raisins (55 ppm); Romaine lettuce (40 ppm) and iceberg lettuce (180 ppm), which is 180 times the amount of fluoride typically added to municipal water supplies.

In his book Hidden Fluoride in our Food, Green writes, “As a result of fluoride-based pesticide residues on produce, researchers are finding that lettuce, tomatoes, cabbage, raisins and other common foods are also subject to even higher exposure levels than found in fluoridated water. The common pesticide cryolite (sodium aluminum fluoride containing both aluminum and fluoride) is found at alarmingly high rates in foods that easily absorb chemicals, such as potato skins, white grapes and strawberries."

Fluoride is not a benign substance, either. It accumulates in calcium-rich tissues of the body, including the bones, teeth, brain, heart and connective tissues. Additionally, fluoride gives an assist to heavy metals, increasing their ability to cross the blood-brain and gut-brain barriers. A noted animal study found increased incidence of aluminum in the brain from fluoride exposures at the same concentration as found in fluoridated drinking water, resulting in kidney disease and brain lesions which resembled those of humans who had Alzheimer’s disease.

But wait. There’s more. Fluoride is also a known enzyme inhibitor, which can suppress thyroid hormones and more. Likewise, fluoride squelches the production of melatonin and serotonin as well as the proper production of insulin. Melatonin is a hormone that regulates the sleep-wake cycle and is produced by the pineal gland, while serotonin “the feel-good hormone” is a chemical in the body that works as a neurotransmitter to maintain proper mood balance, while a shortfall of serotonin can lead to depression. Insulin, of course, is a hormone secreted by beta cells in the pancreas that helps turn glucose in your body into energy. Without insulin, your cells cannot effectively use bodily glucose.

Then there’s the fact that a study published in The Lancet found that fluoride inhibits or destroys acetylcholinesterase, which is an enzyme needed for proper neurotransmitter function for learning and memory. Add those to the fact that four reports published in the Journal of the American Medical Association (JAMA) cited a correlation between fluoride from fluoridated water and an increased risk of hip fractures, and the list of fluoride fallout continues to grow. A University of Toronto study points toward residents of cities that fluoridate their water have double the fluoride accumulation in their hip bones compared to those living in cities which don’t fluoridate their water.

Now, apply these adverse effects to foods that can have many times the amount of fluoride found in fluoridated water. Add up the fluoride found in non-organic foods plus fluoride found in water, toothpaste and other items and it’s truly over the top—as well as unhealthy. Other general observations about fluoride in foods include: the more processed the food is, the more fluoride it contains, and flavored beverages such as soda, sports drinks, juices and more can have between five to 10 times more fluoride than bottled water and other sources of fresh water.

Of course, organic food is grown without fluoride pesticides, so you can decrease your fluoride intake by eating more organic vegetables, fruits and legumes.

There you have it. One more reason to eat organic. Learn more about USDA Organic here.

This information is intended for educational and informational purposes only. It should not be used in place of an individual consultation or examination or replace the advice of your health care professional and should not be relied upon to determine diagnosis or course of treatment.
#brain health , #Organic , #Food Additives , #Pesticides