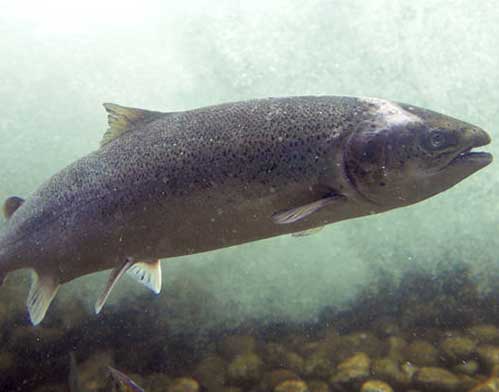 [vc_column css=".vc_custom_1501856667556{padding-right: 0px !important;padding-left: 0px !important;}"][vc_column_text el_id="text-content"]November 19, 2015, the FDA approved genetically engineered (GE) salmon for human consumption—without labeling it as genetically modified and insisting that it’s safe—while at the same time challenged the term “Non-GMO,” saying that it conveyed an overly broad and inaccurate meaning when referring to food products. The FDA’s rationale was, “Most foods do not contain entire organisms.”

They’d prefer food labels to say, “Not bioengineered,” or “This oil is made from soybeans that were not genetically engineered.” Plus, the FDA is still opposed to mandatory disclosure of genetically modified ingredients on food labels.

For consumers and companies who fight for the right to know what’s in their food and to keep GMOs out of their foods and products by the “Non-GMO” label, that’s unthinkable.

The GE fish is AquAdvantage salmon, produced by AquaBounty Technologies in Waltham, MA., and the FDA states it has “rigorously evaluated extensive data submitted by the manufacturer . . . and other peer-reviewed data.” It adds, “There are no biologically relevant differences in the nutritional profile of AquAdvantage salmon compared to that of other farm-raised Atlantic salmon.”

The salmon are not the same, though. For starters, the genetically modified salmon combines the genes of Atlantic salmon and Chinook salmon with those of a different marine species, an ocean pout, to make it grow twice as fast. The GE salmon is also more allergenic, and the GE fish can escape holding areas and reproduce, although AquaBounty reports that the fish are well-contained and sterile. But Canadian scientists pointed out that the GE salmon could crossbreed with a closely related species and pass on GE traits to offspring. Additionally, the Center for Food Safety and other entities cited reports of negligence and mismanagement at AquaBounty’s facilities that could increase fish escape risk.[vc_single_image image="7986" img_size="full" alignment="center"][vc_column_text]The FDA indicates that the GE salmon is safe, doesn’t require a GE label, and plans to make it available nationwide in about two years, but consumers still want to know if the food they eat is genetically modified or not. Polls back that up, including one conducted by ABC News, in which 93 percent of U.S. consumers said the federal government should require labels on goods saying whether it’s been genetically modified or “bio-engineered.”

Truth is, consumers want to know what’s in their food, saying NO to GMOs in force—casting their votes with their food dollars.

Just Label It, the DARK Act and the Future of Labeling GM Foods

The genetically engineered salmon has been waiting to be approved for almost 20 years, and the battle whether or not to label genetically modified (GM) food is constant, ever-changing and continues to be addressed from both sides.

For those who want to see food companies “Just Label It,” there’s no turning back and no giving up until there’s full transparency about what’s in our food. So, if the food has been genetically modified in any way, there needs to be a label to tell consumers that the product is GM—a mandatory actual label or symbol clearly stating it is GM, not a voluntary “SmartLabel,” a QR code that can be scanned only by smartphones, suggested by the food industry in place of an actual word label. (Advocates of labeling GM foods call the “Smart” label an acronym for Still Messing Around Rejecting Transparency.)

Whether to actually label a product or just put a QR code on it has been a burning issue in our government recently as well as something called The Safe and Accurate Food Labeling Act, also known as the Deny Americans the Right to Know (DARK) Act by those who want to see GM food labeled.

If the DARK Act is passed, among other things, it would negate all existing GMO labeling laws, including Vermont’s set to go into effect in July, requiring companies to begin labeling their foods that are genetically modified. (Vermont’s not alone; other states are pushing to enact GM labeling requirements.) The DARK Act also contains language that would overrun current and pending local GM labeling laws in place and stifle new ones from taking their place. In short, it would take local control over GMOs away from citizens.

Fortunately, it appears that the DARK Act is dead, and the “lame duck” Congress will make it extremely difficult for the Grocery Manufacturers and other biotech companies to pass anything new preventing Vermont from forcing companies to start labeling GM foods. That is a huge victory for the Non-GMO movement, but the fight’s not over. As with the Frankenfish GE salmon that’s been waiting to get approved for human consumption for nearly 20 years—and just did—it’s a relentless battle to be fought at every front over the long haul.

That’s the only way “Just Label It” will win.
#Organic , #Non-GMO