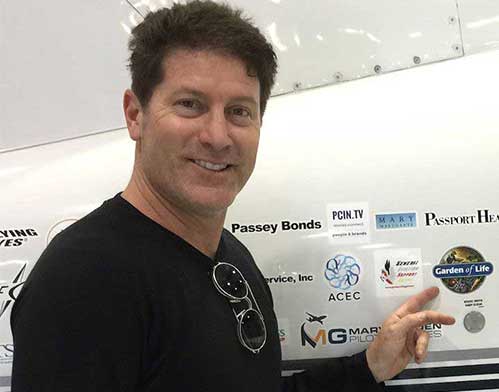 Brand Ambassador and pilot Robert DeLaurentis recently completed his 90-day, 22-country solo flight around the world that began on May 17, 2015.

DeLaurentis flew in a 1997 single-engine Piper Malibu Mirage plane he named the "Spirit of San Diego ” in honor of Charles Lindbergh and his “Spirit of St. Louis.”  He joked that it was a plane “on steroids,” due to all of the advanced technology added for the global journey. Changes, including an upgraded engine and the installation of an advanced GPS and gear system, were made to make the flight easier for the seasoned pilot.

Flying in a single-engine plane created an interesting packing situation for DeLaurentis - he had to plan accordingly for his three-month journey. Unfortunately, there were no "fly-thru” restaurants along his flight, so Garden of Life products made in-flight dining possible. Packets of Raw Protein, Raw Meal, Organic Plant Protein as well as fucoProtein Chocolate Macadamia, Superseed and Chocolate Covered Greens bars were compact nutrition that made long flights manageable.

His flight wasn't without other problems.  He said the worst moment was making an emergency landing in Malaysia after his engine started spewing oil.

Shaken but undeterred, he got back into the cockpit after repairs and flew out of Malaysia. With a few stops in between, DeLaurentis landed back in San Diego on August 22, 2015, having logged over 27,000 miles in just over three months.

His trip also helped to bring awareness and contributions to two charities that are dear to DeLaurentis: the Charles A. Lindbergh and Albert E. Schweitzer Elementary School in San Diego and the Aviation Owners & Pilots Association (AOPA) Scholarship Program.

The Charles A. Lindbergh-Albert E. Schweitzer Elementary is located in the Clairemont Mesa area of San Diego and is a Service Learning Magnet School. Every classroom experience provides an opportunity for reflection, improvement, and success. Students are expected to be creative, independent thinkers and problem solvers. Academic excellence is supported by curriculum that integrates technology and is based on content standards across all disciplines.  The school represents a very diverse community. Students speak many languages including English, Spanish, Vietnamese, Russian, Chinese, Farsi, and Filipino. Their ethnic diversity promotes a positive awareness and a real world understanding of different cultures.

Now back on land, DeLaurentis is getting acclimated to life and business on the ground, his first week consisting of interviews with local and national media. Through it all, DeLaurentis has said that this trip could not have been what it was without the support of his various sponsors.

“I was able to live this adventure of a lifetime and serve as an inspiration to thousands of people because of the ongoing support of my sponsors,” he said.

To learn more about Robert DeLaurentis, the Spirit of San Diego and his charitable causes, visit his website Flying Thru Life.
#Brand Ambassador , #Influencers