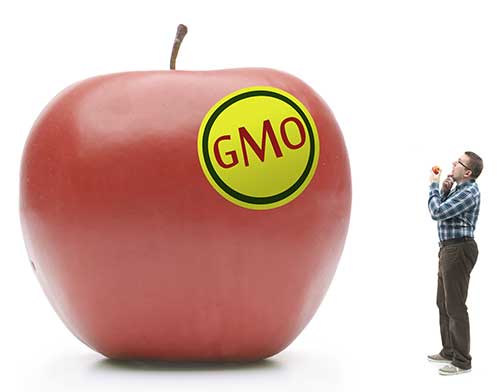 To label GMOs or not to label GMOs—that’s the often-heated debate. But the lines are being drawn more clearly on many fronts of this ongoing battle. Among the line-drawing are Campbell Soup Company, Gatorade, and the state of Vermont. Here’s an update.

Mm . . . Mm . . . Good—for Campbell’s, Gatorade and Vermont. Among others, these three have listened to consumers’ concern about GMOs and have taken a solid stand for GMO labeling.

In an unprecedented reversal, Campbell’s recently changed its position on GMO labeling. On January 7, 2016, Campbell’s President and CEO, Denise Morrison, shared a message about supporting mandatory national labeling of GMOs for their products and others nationwide, while the New York Times and other reporting agencies quickly picked up on this landmark announcement.

Here is a summary of her message. Guided by their purpose—Real food that matters for life’s moments—Morrison knows that consumers appreciate what goes into their food and want to feel good about the choices they make for themselves and their loved ones. She pointed out that the topic of GMOs has become a top consumer food issue with 92 percent of consumers in favor of putting it on the label.

So, with a “consumer-first attitude,” she announced Campbell’s support for mandatory national labeling of products that may contain genetically modified organisms (GMOs), and proposed that the federal government provide a national standard for non-GMO claims made on food packaging.

She continued, citing that there currently is no federal regulation requiring labeling that informs consumers about the presence of GMOs in their food. Since there was no federal action, many states have addressed the issue.

So, instead of waiting for federal conclusions or for variations in stateto-state policies and laws, she believes “proposing a mandatory national solution is necessary” and that “printing a clear and simple statement on the label is the best solution for consumers and for Campbell.” Even if the government doesn’t soon require GMO labeling, Campbell’s will go ahead and label its products anyway.

And while she didn’t dispute the science behind GMOs or their “safety,” she did say that “as a result of the change in our position on GMO labeling, Campbell is withdrawing from all efforts led by groups opposing mandatory GMO labeling legislation, including those led by GMA,” the Grocery Manufacturers Association, which has been a strongly opposed to labeling products that contain GMOs.

Guided by a strong sense of transparency, she concluded with these words: “I truly believe it is the right thing to do for consumers and for our business.” Another change along the GMO labeling lines is Gatorade, a division of PepsiCo, announcing that, due to consumer interest, they will offer an organic Gatorade option this year. (Organic, of course, by definition means no GMOs allowed.)

Al Carey, CEO of PepsiCo Americas Beverages, states, “It’s a consumer interest. I think they’re very interested in non-GMO and organic, and to the degree you can make it meaningful to the consumer—do it.”

PepsiCo’s decision for the organic Gatorade option is definitely a step forward, even though in the past few years, they, too, have sided with and supported the action of GMA in the fight against labeling GMOs. To be clear, PepsiCo hasn’t withdrawn from all efforts of groups opposing mandatory labeling GMOs like Campbell’s has, but they have the same opportunity to do so.

Now that PepsiCo realizes that organic and non-GMO are huge interests of consumers, not only are they launching an organic Gatorade option, but they also plan to launch a line of non-GMO Tropicana® products.

This year is also a landmark for GMO labeling for the entire state of Vermont, which has a law set to go into effect July 1st that requires companies to begin labeling products that are genetically modified (GM). Vermont’s not alone in this endeavor. Several other states—30 presently—are pushing to enact GMO-labeling or GM-labeling requirements modeled on Vermont’s upcoming law.

So far, however, Vermont is the only state set to require labeling. Connecticut and Maine may not be far behind, though. They have passed similar laws, but those can’t take effect unless neighboring states do the same. Even with the Vermont law pending, the fight concerning whether or not to label GMOs continues. The GMA and three other trade associations have filed a lawsuit in federal court challenging the Vermont state labeling law as unconstitutional—hoping for a court to strike it down or for a federal law to pre-empt state actions before it goes into effect in July. Essentially, the goal is to get rid of considering mandatory GMO labeling, to make GMO labeling voluntary and/or to take control over GMOs away from states and their citizens.
These efforts have been thwarted up until now, but the fight’s not over yet.

Nevertheless, ground is being gained in the fight for GMO labeling, and Campbell’s, Gatorade and Vermont are part of that movement.

This information is intended for educational and informational purposes only. It should not be used in place of an individual consultation or examination or replace the advice of your health care professional and should not be relied upon to determine diagnosis or course of treatment.
#GMOs , #Food Industry