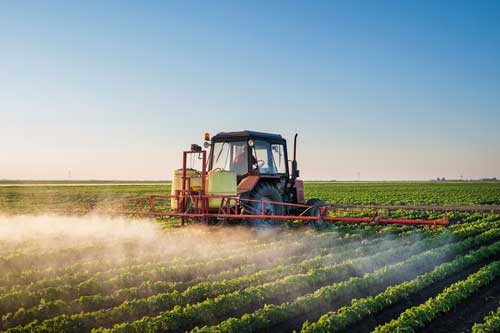 [vc_column css=".vc_custom_1501870979150{padding-right: 0px !important;padding-left: 0px !important;}" el_id="text-content"][vc_column_text]For years, Monsanto, the maker of Roundup, has said that glyphosate, a chief ingredient in the pesticide, is safe. However, studies throughout the years have indicated otherwise, and now, the International Agency for Research on Cancer (IARC) has classified five pesticides as either probably or possibly carcinogenic to humans—and glyphosate is one labeled “probably carcinogenic to humans.”

With the findings of previous studies and that most recent labeling, it would seem that the use of Roundup and other pesticides would be throttled back, but that’s not the case. In fact, just a few years back, the EPA approved up to a 20-fold increase in the legal residue of glyphosate in food crops, after consistent and successful lobbying for that approval from Monsanto.

This approval happened despite scientists and studies warning that glyphosate can be hazardous to health. For example, glyphosate is shown to be an endocrine disruptor, which can result in long-term effects, particularly with reproductive health. And know this: the “dose makes the poison” rule is not in play with endocrine disruptors because they can cause health fallout in our bodies even at low doses—even amounts that are present in food grown with glyphosate.[vc_column_text]Additionally, other studies point out that glyphosate’s “negative impact on the body is insidious and manifests slowly over time as inflammation damages cellular systems throughout the body.” Glyphosate also “enhances the damaging effects of other food-borne chemical residues and environmental toxins.”

Years ago, Reuters also reported that glyphosate “could be linked to a range of health problems and diseases, including Parkinson's, infertility and cancers.”

Glyphosate—mostly in the form of Roundup—has been widely used in the United States since the 1970s, and has increasingly been used since then. As of a few years ago, more than 100 million pounds of it were being used each year. In fact, in 2007, up to 185 million pounds of glyphosate was used by U.S. farmers—double what was used just six years prior to that time, according to EPA data. Additionally, it is a broad-spectrum herbicide—the most highly produced one presently—used in more than 750 different products for agriculture, forestry, urban and home applications.

It has been used even more with the development of genetically modified glyphosate-resistant crop varieties, says the IARC.

Now back to the IARC’s latest findings on glyphosate. Among other statements, the IARC paper also says that glyphosate and its many formulations “induced DNA and chromosomal damage in mammals, and in human and animal cells in vitro.” And “one study reported increases of blood markers of chromosomal damage (micronuclei) in residents of several communities after spraying of glyphosate formulations.”[vc_column_text]Monsanto still hasn’t changed its stance, however, even after these findings by the IARC. In fact, they reject the IARC findings and contend that “all labeled uses of glyphosate are safe for human health and supported by one of the most extensive worldwide human health databases ever compiled on an agricultural product.”

At any rate, the debate continues and, according to the IARC, glyphosate is a "probable carcinogen" for humans.

The good news is that glyphosate isn't allowed in organic farming, so you can avoid it by consuming foods that are Certified USDA Organic and Non-GMO Verified.[vc_single_image image="2352" img_size="full" alignment="center" onclick="custom_link" link="/content/about/why-gol/usda-organic/"][vc_single_image image="2353" img_size="full" alignment="center" onclick="custom_link" link="/content/about/why-gol/non-gmo/"][vc_column_text]This information is intended for educational and informational purposes only. It should not be used in place of an individual consultation or examination or replace the advice of your health care professional and should not be relied upon to determine diagnosis or course of treatment.
#brain health , #Organic , #Pesticides , #Pregnancy , #cancer , #Farming