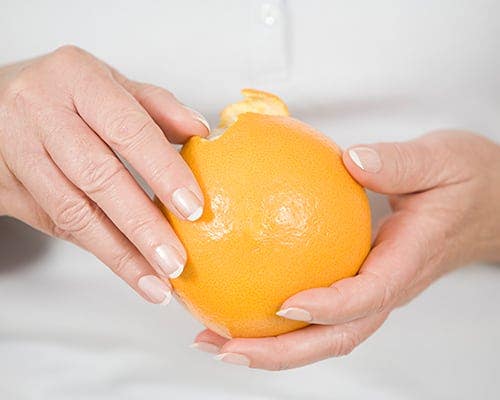 For anyone not already a fan of the juicy, sweet, and nutritionally sound orange, new research may sway more people to consume this fruit. A study published in The American Journal of Clinical Nutrition found that people who frequently eat oranges have a decreased risk of developing macular degeneration, a common eye disease that can lead to severe vision loss.

The study was led by researchers at The Westmead Institute for Medical Research, and took place over the course of 15 years. It evaluated 2,000 Australian adult participants who were over the age of 50. The findings revealed that consuming at least one serving of oranges daily reduced the risk of developing macular degeneration by up to 60 percent.

While some people enjoy drinking orange juice every day, this frequency may not be desired for most people to follow through with on a long-term basis. Fortunately, the study also suggested that eating just a weekly serving of oranges could still offer worthwhile benefits. This is because research found that oranges are rich in flavonoids, which may be a contributing factor in helping to protect against macular degeneration.

This finding from the study was particularly interesting because it specifically focused on the connection between flavonoids and macular degeneration. Flavonoids are well known for their powerful antioxidant properties, which benefit the immune system by providing anti-inflammatory benefits. Flavonoids are found not only in oranges, but actually nearly all fruits and vegetables. Apples, red wine and tea are other rich sources.

However, the data with the oranges proved to be significant because there was not a comparable connection found between other food sources protecting the eyes against the disease. Therefore, while the experts found other notable benefits common among other foods containing flavonoids, there was a clear distinction with oranges leading above the rest with regards to protection against macular degeneration.

The prevalence of macular degeneration

Unfortunately, these statistics show that AMD is very common. Further, once someone reaches their 80s, there’s a 1 in 10 chance that they will suffer from late AMD. Currently, research has shown that age is the strongest known risk factor for macular degeneration.  It has been found that AMD is more prevalent in women. There is no cure for this disease at this time.

The good news is that AMD is a preventable form of vision loss, according to Harvard Health. Becoming knowledgeable about AMD's earliest symptoms and having regular eye exams can help to catch the disease in its early stages. Treatment usually involves a combination of various treatments as well as lifestyle modifications.

In addition, as this most recent study shows, adding oranges to a well-balanced diet and overall healthy lifestyle can all make a significant difference in lessening the risk of developing macular degeneration.

It is also important to be proactive about eye health, which includes getting regular screenings by a healthcare professional. Age-related macular degeneration is often spotted during an eye exam, before the symptoms become noticeable, according to the American Macular Degeneration Foundation.

Early stages may show deposits seen on the surface of the retina, or the macula itself may change color (pigment). Fortunately for some people, the disease does not progress beyond this condition. For others who have advanced stages of macular degeneration, symptoms may include blurred or fuzzy vision, wavy distortions with straight lines and objects appearing smaller than they actually are, and/or the appearance of a gray, dark or empty area in the center of the visual field.

So the message is, do everything you can to prevent this age-related disease, including adding organic oranges to your diet.