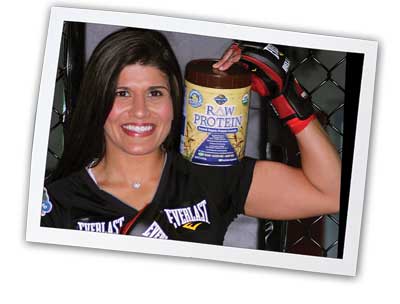 Jessica Aguilar laughs when she recalls childhood memories of her mother yelling at her and her two older brothers to stop fighting. However, while most siblings fought over toys or the television remote, she and her brothers wrapped towels around their hands and boxed each other, usually breaking more furniture than bones. All of the rough housing was great practice for Jessica, who eventually traded in the towels for boxing gloves, and recently became the #1 ranked Mixed Martial Arts (MMA) Strawweight in the world, according to the latest Unified Women’s MMA Rankings. “I always wanted to be a professional athlete,” said Jessica. “But I had no idea I’d be competing in MMA. I didn’t know anything about it when I first started in 2006 because there were very few females competing at that time.”

Mixed Martial Arts combines techniques of various other fighting systems, including Boxing, Brazilian Jiu Jitsu, Wrestling, Judo, Karate, Kickboxing, Kung Fu, Tae Kwon Do and other disciplines. While the sport has been primarily dominated by males, women’s MMA is currently enjoying an explosion in popularity—thanks to organizations such as Strikeforce, Bellator and the all-female Invicta Fighting Championships that invite women to compete. Jessica signed with Bellator Fighting Championships in 2010 and amassed a 15-4-0 record that has earned her a spot as the #6 ranked, pound-for-pound female fighter in the world. At 5’3 and 115 pounds, the petite, 32-year-old Mexican-born competitor, who is known in fighting circles as “JAG,” is on a hot streak with six straight wins in a row, and is busy gearing up for her next fight later this year. Deceptively cheerful and smiling until she faces an opponent in the cage or on the mat, she’s quick to point out that the sport has enabled her to accomplish things she always wanted to.

“Competing in MMA is my passion, and it’s taken me all over the world,” said Jessica, who has traveled to Japan, Canada, Russia and several other countries. “Best of all, I have always wanted to be in a position where I could help others, and MMA gives me a great platform to do that. As an ambassador for the sport, I’m invited to work with a lot of kids and people in different communities, in addition to working on causes that I believe in and want to support.”

In addition to being one of the top-ranked fighters in the country, Jessica’s MMA Awards include 2010 Female Fan Favorite of the Year, 2011 Female Flyweight of the Year and 2012 Florida MMA Female Fighter of the Year. She trains at American Top Team in Coconut Creek, Florida, where she alternates CrossFit workouts with strength and conditioning exercises and weight lifting. In the last few years, she has paid more attention to her diet and prefers to eat mostly vegan dishes. She also uses Garden of Life® supplements—whether she’s at home or on the road.

“I’m lactose intolerant and have had a few digestive problems in the past, so I use RAW Probiotics™,” she said. “And I’m always on the go, so I like the convenience of putting RAW Protein into a shaker cup and taking it with me. It’s just a few of the reasons I love having Garden of Life® as a sponsor!