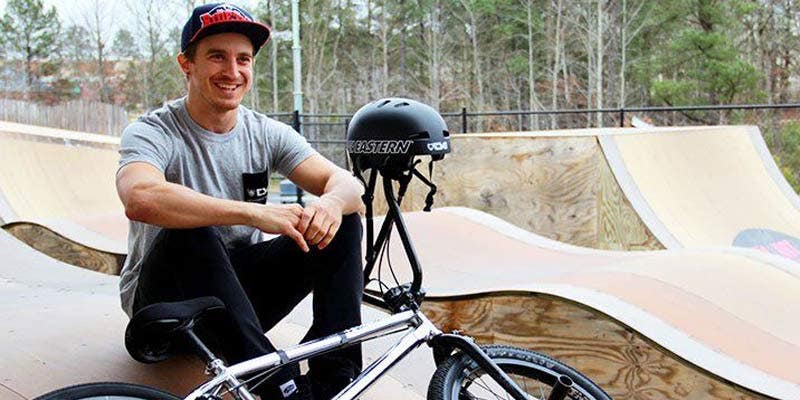 In the high-flying, daredevil world of bicycle motocross stunt riding, injuries come with the territory. Professional BMX rider and Garden of Life® brand ambassador Josh Perry found that out the hard way five years ago when he was practicing a trick that would change his life. He vividly remembers the moment when he attempted a flair whip on a six-foot quarter pipe straight out of the foam pit. (Translation: He was doing a back flip on his bike, combined with a 180-degree turn so he could land facing backwards down the ramp.) On this particular day, something felt wrong and he overcompensated during the flip, resulting in a crash landing flat on his head. SeveralCAT scans and rounds of tests later, doctors determined that a large tumor was covering the entire left side of his brain. Although the mass was not caused by the injury, the fateful event led to a diagnosis that ultimately saved his life.

“I was shocked by the news, but it made sense because I had been suffering with nausea and debilitating migraines for more than a year before the accident,” Josh recalled. “I was told that the surgery was very risky because the mass was situated on an important artery in my brain, and the slightest error could cause a stroke, paralysis or death.”

Surgeons drilled four holes into his head and carefully removed as much of the tumor as possible. The operation was deemed a complete success, but his ordeal was far from over. Two years later, Josh was forced to undergo Elekta Leksell Gamma Knife® radiosurgery to treat two smaller tumors in the same area of his brain.

The life-altering experience gave the fast-moving stunt rider time to slow down and evaluate his life, leading to a decision to learn as much as he possibly could about staying healthy.

“I realized that just because you may be athletic or think you are fit, that doesn’t necessarily mean you are healthy,” he said. “I thought because I was riding my bike and performing so much that I was in great shape. However, I had been fueling my body for years with fast food, candy, ice cream, sodas and cheap frozen pizzas from the grocery store. I had never made the connection before about how this processed ‘food’ was slowly killing me and affecting my health, performance, mind, mood, emotions and even my relationships with others.”

Prior to his accident and surgeries, Josh’s entire life had revolved around becoming one of the biggest names on the BMX circuit and performing in shows throughout the country. After surviving the incident, he recognized it was possible to be interested in and passionate about more than one thing. Obsessed with learning more about health, he enrolled at the Institute of Integrative Nutrition, the world’s largest nutrition school. He completed the program in 2015, earning a certification as a Holistic Health Coach. Right away, he saw that his training could help his friends, family and the athletes he performed with during tours.

“I’ve experienced so many positive changes with my health that I enjoy sharing this knowledge with others,” he said. “My favorite thing I like to tell people is that small changes lead to long-lasting results. Many people need to hear that simply changing the quality of the foods they eat can dramatically improve their lives.”

When Josh overhauled his own diet a few years ago, he switched to loading his grocery cart with organic foods and began searching for clean, Certified USDA Organic and Non-GMO Project Verified nutritional supplements. Convinced that Garden of Life was the best choice for his nutritional requirements, he started taking the supplements with him on tour. Soon his fellow BMX buddies were bartering for Garden of Life Protein bars, and asking about protein shakes and Dr. Formulated probiotics. As his stash dwindled, Josh approached Garden of Life about sponsoring his tours and became a brand ambassador. He visited the company’s headquarters last year and delighted employees by riding a smoothie bike and showing video highlights of his most jaw-dropping stunts. But most of all, he likes to share his inspiring story with groups and organizations who frequently hire him as a motivational speaker.

“I let people know that it’s important to do what you love every day,” he said. “Visualize what you want to do, and then go do it. Your mind is the only thing stopping you.”

For more information about Josh, visit his website at www.DailyBrainstorms.com. You can also visit his Garden of Life Brand Ambassador page.