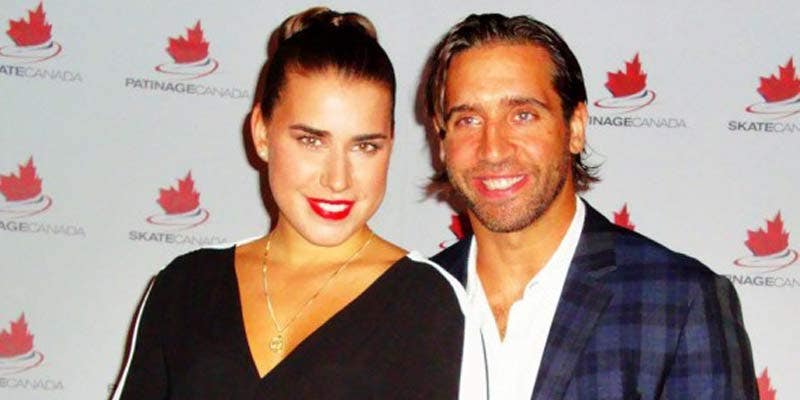 What’s a couple to do after filling up the trophy case with Olympic medals and a Stanley Cup? For National Hockey League veteran Max Talbot and figure skating champion Cynthia Phaneuf, the next logical goal was parenthood. As Canada’s most accomplished couple on ice, they are expecting their second child at any time and are hoping to make changing diapers look as easy as landing a toe loop or winning a face-off.

“We’re waiting until the last minute to get ready for this one,” explained Cynthia, who said there was a lot more fuss last year over the birth of their son, Jaxson. “The baby’s room is not ready yet, and we don’t know if it’s a boy or a girl. We’re waiting to be surprised.” Most certainly the next “ice baby” will inherit some stellar athletic genes. Max is a seasoned NHL center currently with the Boston Bruins. His career has included stints with the Colorado Avalanche, Philadelphia Flyers, and, most notably, he scored the winning goal for the Pittsburgh Penguins in the 2009 Stanley Cup Finals. Cynthia, who retained her maiden name Phaneuf after the couple married, is Canada’s two-time national figure skating champion and a 2010 Olympian. Both hail from Quebec, but met in Montreal in 2012 when they discovered they shared the same massage therapist. Max was floored by Cynthia’s achievements from the moment they met and said she will most likely be the one teaching their children to skate.

“People think it’s tough being a hockey player, but it takes a lot more work and determination to do what Cynthia has done,” he said. “There is so much more mental toughness required to be a top figure skater. Always an overachiever, Cynthia landed her first triple salchow at age 11, and was Canada’s youngest national champion in 2004 when she was just 16. Max was drafted into the NHL out of the Quebec Major Junior Hockey League (QMJHL) by he Pittsburgh Penguins in 2002 and led the Hull/Gatineau Olympiques to back-to-back President’s Cups while earning the Guy Lafleur Trophy as playoff MVP both years. Despite his accomplishments, he insists his wife is the better skater and the better athlete.

“She can go out and run a half marathon or a full marathon, and she’s not even a runner,” he said. “She’ll definitely be up for chasing our two kids around!”

Cynthia acknowledges that her secret to staying healthy is eating what her body craves and to always keeps moving, even when it’s not easy. During her first pregnancy, she worked out regularly and took yoga classes. With a toddler at home, it’s challenging to find time for fitness classes, but she finds ways to stay active every day.

“I like to go on long walks in the park with my son,” she said. “I think it’s important to keep moving, even on difficult days.” With both pregnancies, Cynthia has followed an organic diet and relied on Garden of Life® prenatal vitamins and Oceans 3™ Oceans Mom® Prenatal DHA fish oil to help her stay healthy. Max also depends on Garden of Life supplements for long days practicing on the ice and starts each morning with a RAW Protein Marley Coffee smoothie blended with Perfect Food® RAW greens.

His Garden of Life regimen also includes mykind Organics Men’s multivitamins, Dr. Formulated Men’s Probiotics, and Wobenzym® N to maintain healthy joints. “After practice, I like to grab a Garden of Life protein bar and share some of them with my teammates,” he said. “A lot of them are young guys who are just starting to learn about nutrition.”

During their spare time, Max and Cynthia like to support charities that benefit children, including the Gervais-Talbot Foundation, an annual golf event that Max started several years ago with his friend and fellow NHL player Bruno Gervais. To date, their foundation has raised more than $900,000 for Make-A-Wish Foundation and other children’s charities.

“We like to focus on helping kids who are either sick or who can’t afford to eat healthy meals,” said Cynthia. “It’s very important for us to be able to give back.”