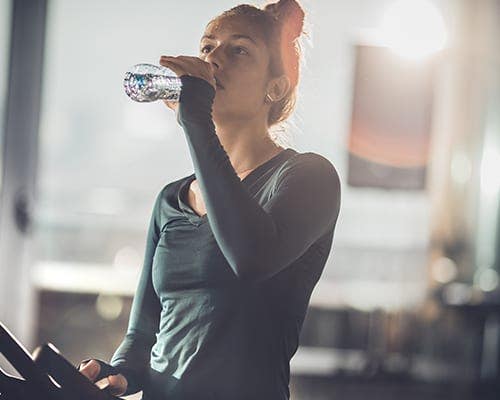 In most cases, drinking plenty of water on a regular basis is a perfectly healthy habit. Staying hydrated is in fact crucial for overall health and well-being, supporting the cells, organs, and blood vessels of the body.  According to Healthline, adequate water intake supports cognitive function and energy levels, relieves constipation, helps to maintain a healthy weight, and much more. However, for some people, the desire to drink water comes down to an insatiable need for more no matter how much is ingested. Excessive thirst is also referred to as polydipsia.

How much water the body needs on a daily basis

The amount of water required by the body will vary based on each individual’s health status, activity and exercise levels, and climate. The old adage that suggests drinking eight 8-ounce glasses of water a day is an easy to remember amount that suits most, says the Mayo Clinic. On average, 20 percent of daily fluid intake comes from food (like fruits and vegetables with high water content) and the rest from water and other liquids. Excessive coffee or tea, which are known diuretics, can contribute to polydipsia says Heathline.

Thirst typically arises from understandable causes, such as after profuse sweating following an intense workout, spending time outdoors in a hot environment, or eating a very salty or spicy meal. Dry mouth and thirst can also be due to other harmless causes, such as sleeping with the mouth open or short-term nervousness (like before a presentation), says Harvard Health. People may also drink often out of habit. However, when excessive thirst continues without an easily explainable cause, it may become a legitimate health concern.

Constant thirst can be present as a result of dehydration following a bout of diarrhea or illness that causes vomiting, according to WebMD. Excessive sweating, whether due to activity or time spent in a hot climate, is also another common cause of dehydration. Even mild dehydration can lead to excessive thirst and other symptoms, including dry mouth, lethargy, muscle weakness, dizziness, and headache, reports Medical News Today.

Dehydration can be especially serious and even life-threatening for the elderly, infants, and young children, reports Healthline. Unfortunately, these groups have a higher risk of dehydration. In addition, people at an elevated risk for dehydration include athletes, people living at higher altitudes, or those with chronic illness, including kidney disease, adrenal disorders, cystic fibrosis, and more, reports Medical News Today.

Thirst that just can’t be quenched is often an early warning sign of diabetes, suggests WebMD. The craving for more water results from an excess of glucose buildup in the body, which causes more frequent urination. As a result, the body is in a constant struggle to replenish lost fluids. Additional symptoms may include fatigue, hunger, and blurred vision.

For some people taking various prescription medications, polydipsia may be drug-induced, according to Healthline. Common drugs that may trigger thirst and dry mouth include diuretics, vitamin K, corticosteroids, and stimulants such as amphetamines. Other medicines may also cause excessive thirst.

A lack of saliva leads to dry mouth, and consequently, frequent thirst. According to WebMD, dry mouth can occur due to several causes, including malfunctioning glands in the mouth, side effects of certain medications, various diseases like Sjogren’s syndrome, head or neck nerve damage, or smoking. Dry mouth is usually also accompanied by other symptoms such as changes in taste, gum irritation, and foul breath.

Excessive or abnormal thirst can also be caused by a mental disorder known as psychogenic polydipsia, says Healthline. The condition is typically associated with patients exhibiting severe mental illness and/or developmental disability.

When to consult a doctor

If excessive thirst remains constant and has no identifiable cause, and especially if it presents with other symptoms and frequent urination, it is recommended to consult an expert, suggests MedlinePlus. Most health evaluations will take into consideration activity levels, changes in diet or appetite, as well as frequency and duration of symptoms. Recommended treatment will vary based on testing and findings of any underlying health conditions which may be contributing to the constant thirst.