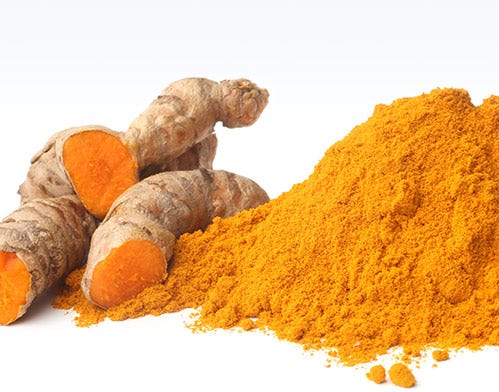 Many people are familiar with turmeric from eating curry dishes or other foods colored by its extract such as mustards and broths. It has even been used as a colorant in some cosmetics to promote a healthy glow of the skin. Originating from India and Southeast Asia, turmeric has been used traditionally for thousands of years as both a spice as well as a therapeutic herb occasionally used in religious ceremonies. In modern times, turmeric has gained increased popularity way beyond its customary, culinary and beautifying uses, as science has proven the medicinal benefits of this powerhouse ingredient.

Derived from a plant of the ginger family, turmeric’s benefits can be primarily attributed to its main chemical compound and active ingredient known as curcumin. With strong anti-inflammatory and antioxidant properties, curcumin works in the body on the molecular level and can be beneficial to many conditions where inflammation is the primary complaint. As documented in many health journals, studies, and medical resources, these conditions include arthritis, heart disease, joint pain, lupus, Crohn’s disease, ulcerative colitis, chronic diarrhea, stomach ulcers, irritable bowel (IBS), and many more. As inflammation is often the chief contributor to many diseases, curcumin works to inhibit the pathways which can lead to inflammation.

With heart disease still one of the leading causes of death in the United States, turmeric’s cardio-protective properties have been studied extensively, with much published research available. One of the most remarkable includes a study published in the American Journal of Cardiology that found turmeric extract reduces post-bypass heart attack risk by 56%.

While not deadly, arthritis is another very common health ailment. In numerous studies of patients with rheumatoid arthritis and joint-related pain, as noted in the journal Arthritis & Rheumatism and many other scientific publications, curcumin was found to have marked improvement in symptoms and even be more effective at times than anti-inflammatory pharmaceuticals. According to various studies reported in the European Journal of Pharmacology and international journal Psychopharmacology, curcumin has even been shown in controlled trials to boost levels of brain neurotransmitters serotonin and dopamine, thus helping to alleviate symptoms of depression.

Going back to turmeric’s beautifying benefits, the results go beyond superficial color enhancement on the skin’s surface. Studies have also shown that the strong antioxidant properties of turmeric’s curcumin support healthy aging by inhibiting the breakdown of collagen. It works by helping to neutralize free radicals in the environment, as well as boosting the body’s own natural antioxidants, to promote beautiful, smooth skin.

With so many noted health benefits, it can be tempting to grab the nearest turmeric supplement available. However, it is very important to carefully source any supplement and choose organic turmeric to ensure quality. Choosing organic also means that the product was produced with environmental sustainability in mind, thereby avoiding the use of synthetic fertilizers, prohibited pesticides (which can cause bodily harm and many side effects), and GMOs (genetically modified organisms). It also means that precise soil and water conservation methods were utilized to help reduce pollution. When sourcing in the USA, look for the Certified USDA Organic seal, a third party agency which verifies genuine organic products.

This information is intended for educational and informational purposes only. It should not be used in place of an individual consultation or examination or replace the advice of your health care professional and should not be relied upon to determine diagnosis or course of treatment.
#spices , #Organic , #Joint Health , #Digestive Health , #Antioxidants , #Healthy Eating