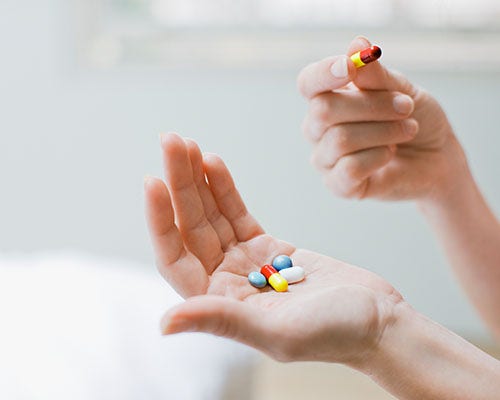 From treating everything from arthritic knees to menstrual cramps, reaching into the medicine cabinet for an anti-inflammatory like aspirin, ibuprofen, or naproxen is often the easy fix that many people rely on for quick pain relief. In fact, NSAIDs, aka nonsteroidal anti-inflammatory drugs, are one of the most commonly used pain relievers in the world today. Advertising reinforces the ease and convenience of these popular over-the-counter medicines, touting that popping a single high-dose pill can relieve symptoms all day long. However, they come with many serious and even potentially deadly risks. Yet, many people don’t heed the warning labels or fail to acknowledge the dangers of resorting to anti-inflammatories for pain relief.

One of the largest misperceptions is that OTC medications, including anti-inflammatories, are safer than prescriptions. While most over-the-counter NSAIDs are typically used at lower doses and for shorter durations, this does not equate them with being harmless. In addition, they are often available at the same strength as prescription NSAIDs, and can be inappropriately overused, including (accidently or intentionally) exceeding the recommended dosage or frequency.

One of the most severe dangers associated with anti-inflammatories is the increased risk of heart failure. According to research published in the British Medical Journal, which analyzed the medical history of millions of patients, NSAIDs elevate the risk of heart failure by a staggering 19 percent. The studies showed a direct correlation with an increased risk and the amount of NSAIDs taken.

The risk for heart attack or stroke may be greater for people with pre-existing conditions, such as heart disease, high blood pressure, high cholesterol and diabetes. Heart problems caused by NSAIDs can happen within the first weeks of use, though are more common with higher doses or long-term use. However, the risk remains even for people who do not have heart disease or additional risk factors.

Another highly significant risk of NSAIDs, regardless of the type, is havoc on the entire gastrointestinal tract. Most people may assume damage is limited to the stomach, but the threat extends to the esophagus and small intestine. People of all ages are at risk of developing a stomach ulcer or stomach bleeding from long-term or high-dose use. Further, experts at the American Gastroenterological Association say that more than half of all bleeding ulcers are attributed to NSAIDs.

Research published in the Journal of Clinical Pharmacology found that NSAIDs negatively affect kidney health in essentially all users. Most often, complications are linked to undetected fluid retention. For those with chronic kidney disease, complete avoidance of nonsteroidal anti-inflammatory drugs is recommended.

NSAIDs can produce life-threatening allergic reactions. This may first display as shortness of breath, wheezing, rashes, and throat swelling, but can be as serious as anaphylaxis.  For asthma sufferers, the risk of experiencing serious allergic reaction to NSAIDs is even greater.

For children and teens, there are specific dangers regarding the use of aspirin, which has been linked to the development of Reye’s syndrome when taken to relieve symptoms of chickenpox or the flu. While rare, Reye’s syndrome can cause liver and brain damage, and can be fatal. In general, children under the age of 16 should not take aspirin products.

Other common side effects of NSAIDs

While not life-threatening, NSAIDs can still produce a wide array of unpleasant side effects, including constipation, dizziness, drowsiness, headache, heartburn, nausea and vomiting. If choosing to use an over-the-counter NSAID despite these risks, be sure to never use continuously for more than three days for fever or 10 days for pain without consulting a healthcare provider.

Fortunately, natural anti-inflammatories can offer effective relief, with a lesser chance of side effects and risks. Following an anti-inflammatory diet is a great way to ease pain naturally, and includes avoiding overly processed and sugary foods, and instead choosing plenty of fresh, organic fruits and vegetables, and eating little to no red meat. Research also shows green tea to demonstrate anti-inflammatory effects, with best results found with drinking 3–4 cups a day.

Supplementation is also a great way to complement an anti-inflammatory diet. Omega-3 fish oils have been shown in numerous studies to reduce inflammation, plus help lower the risk of chronic diseases such as heart disease and arthritis. Turmeric is another well-known anti-inflammatory agent that has been used extensively in Ayurvedic and Chinese medicines. It is well cited to treat digestive disorders, enhance wound healing, and reduce pain, stiffness and inflammation. White willow bark, one of the oldest herbal remedies for pain and inflammation, has also been shown to have great anti-inflammatory properties.