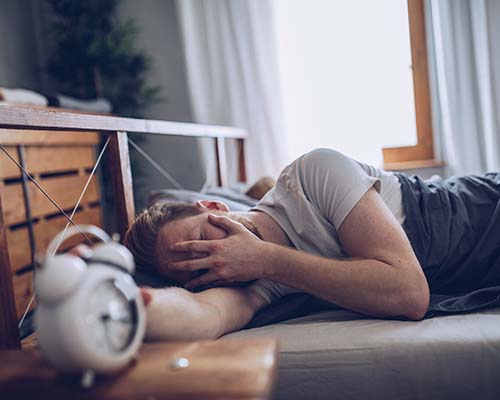 If tossing and turning has become a regular occurrence at night, you’re not alone. Nearly 60 percent of adults experience difficulty sleeping a few nights a week or more, as reported by the National Sleep Foundation. Further, an estimated 50-70 million adults suffer from a sleep or wakefulness disorder, according to the CDC. Even just a night or two of disrupted sleep can wreak havoc on mood, cognitive performance, and other undesirable side effects – all of which can cause many people to become desperate for a solution. While most are aware of the potential dangers and risk of addiction of prescription sleep aids, there is a misconception that OTC sleep aids are a safer alternative.

While there are certainly individual cases where occasional OTC sleep aids can be useful and safe when used correctly, they should still be regarded as a medicine. Further, although OTC sleep aids may be readily available at the corner drug store or online without a doctor’s approval, it is important to consider potential risks and side effects. According to WebMD, some of the possible pitfalls of OTC sleep aids include:

While insomnia and sleep issues are common, a recent study from the University of Pennsylvania School of Medicine reported promising news. Of the roughly 25 percent of Americans who experience acute insomnia annually, the vast majority (about 75 percent) eventually resumed normal sleep patterns. The study investigated the causations of poor sleep patterns and found factors such as stress, illness, and certain medications to be responsible for most cases of temporary sleep issues. With that knowledge, tackling lifestyle causes of sleep problems is a good first step. Of course, it is recommended to consult with an expert to rule out underlying health conditions which may be interfering with sleep.

The National Sleep Foundation suggests taking a holistic approach to resolving sleep issues, including the use of meditation and exercise to decrease stress. Other treatment may include cognitive behavioral therapy. Chamomile tea and lavender essential oil may also be helpful bedtime remedies to soothe the mind and body. Establishing healthy sleep hygiene is also important, which may include engaging in a relaxing bedtime routine with activities like reading or taking a warm bath. Other tips include avoiding naps as well as caffeine late in the day, both which can be disruptive to normal sleep patterns.