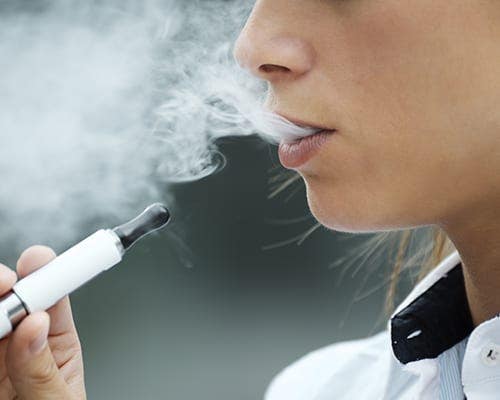 After countless years of warnings about the dangers of tobacco, you may have assumed that smoking had finally gone up in smoke. While millions have kicked the habit, even more have picked up a similar one that’s commonly known as vaping. Why has vaping sparked the interest of so many adults and teens? Let’s clear the air about vaping and bring the truth to light.

Vaping is the act of inhaling a vaporized liquid produced by some sort of vaping device. These devices go by many names, such as e-cigarettes, smokeless cigarettes, cigalikes, vape pens, vaporizers, JUUL, tanks and e-hookah. With its rising popularity among both adults and teens, there’s simply no denying that vaping is in the air.

Why is vaping on such a roll? Well, some consider vaping to be a healthier alternative to smoking because the vapor doesn’t contain as many toxic substances. In addition, lots of smokers start vaping as a way to help ease the transition away from real cigarettes before quitting cold turkey. And vaping is alarmingly prevalent among teens in middle and high school. According to the 2018 National Youth Tobacco Survey conducted by the U.S. Food and Drug Administration (FDA) and U.S. Centers for Disease Control and Prevention (CDC), more than three million teens vape on a regular basis. Is vaping just a trendy habit or are the harmless claims all a smokescreen?

Why the Risks Are a Real Drag

While vaping may seem to be safer than cigarettes, there are still many serious risks. See, the vapor contains nicotine, which is the substance that makes cigarettes so toxic and addictive. Nicotine also raises your blood pressure and gives you a surge of adrenaline, which accelerates your heart rate and increases your risk of a heart attack. And some vaping devices even expose users to more nicotine than real cigarettes! Along with this dangerous nicotine, the US Department of Health and Human Services found that the vapor contains cancer-causing chemicals and a variety of heavy metals, such as nickel, tin and lead. Since the vapor gets exhaled, everyone nearby is also exposed to these harmful chemicals.

While vaping is often marketed as a way to help smokers quit, a recent study found that most smokers who turned to vaping in an effort to kick the habit wound up continuing to smoke both vaping devices and cigarettes. Even more frightening is that vaping may actually encourage teens to smoke cigarettes in the future. In a study of 12th grade students who had never smoked a cigarette, those who started vaping were almost five times more likely to smoke cigarettes one year later.

See Through the Smoke and Mirrors

So while vaping is often considered a better alternative to smoking or a way to give up cigarettes, this popular habit may do more harm than good. Health experts continually warn that vaping simply isn’t safe. It isn’t even legal for anyone under the age of 18 to buy any device that delivers nicotine. Unfortunately, this hasn’t stopped millions of teens from taking up the habit. Since vaping is relatively new, more research is needed to understand the long-term effects. For now, health experts recommend avoiding any exposure.

With its long list of health risks and highly-addictive nature that threaten both teens and adults, vaping clearly isn’t up to snuff.