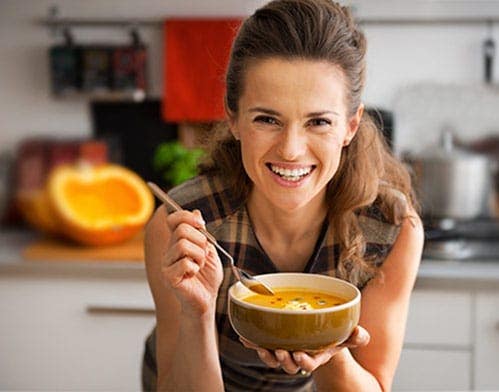 Souping is similar to juicing in that many people use it to rest their bodies from their “regular” eating, but it can be a warmer and often more satisfying way to do so.

Souping, or a soup cleanse, includes eating a bunch of veggie-loaded soups (organic, of course) and eating only that for a few days or maybe even for a week. Doing so gives your body a break from its regular eating and helps the body “rest.” You also have the option to diversify your souping, since there are so many yummy recipes out there, or you can add your favorite veggies or even bone broth to the mix to customize and enrich it.

It’s possible to eat soups for an extended period of time without even feeling that you’ve cut back on calories or that your appetite isn’t being satisfied.

And . . . you can pile in the veggies and other nutrient-rich ingredients, and it doesn’t break the bank! In fact, souping can be an economical way to eat nutritiously. Another plus is that you can make a lot of different soups ahead of time and store them in the refrigerator for several days or in the freezer for up to six months—and then take them out and enjoy them when you want to.

Souping also gives you the opportunity to use a variety of spices or herbs. And unlike juicing, you don’t need any expensive equipment to make soup, and you don’t throw away any pulp! It’s much less waste than juicing and all the fiber is retained when you add certain ingredients to your soups.

For many, juicing can include a high amount of fruits—which are good for you—but can also increase the amount of natural sugars. Of course, juicing veggies along with fruits can bring all the nutritional goodness and not as much natural sugar. With soups, there are few, if any, fruits in the mix. Instead, there are a whole lot of veggies.

And don’t forget: you’ll want to make the soup from scratch so that it’s healthy. (Or at least purchase soup that has been made from scratch and is healthy for you.) Canned soup is not the same, and is often super-high in sodium as well as other unhealthy elements.

Souping. It may be the new juicing.

This information is intended for educational and informational purposes only. It should not be used in place of an individual consultation or examination or replace the advice of your health care professional and should not be relied upon to determine diagnosis or course of treatment.
#Veggies , #Healthy Eating