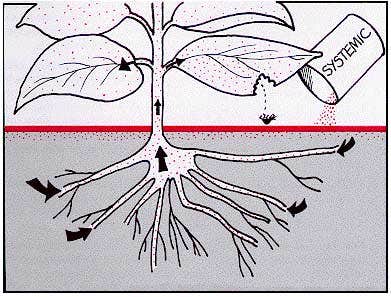 [vc_column css=".vc_custom_1501874086138{padding-right: 0px !important;padding-left: 0px !important;}"][vc_column_text el_id="text-content"]There are dozens of reasons to choose Certified USDA Organic, but here’s yet another significant reason: systemic pesticides. In short, they’re “bad to the bone” for plants and for you.

Maybe you’ve never heard of them, but systemic pesticides are just what they sound like. They're damaging pesticide chemicals that systemically invade plants—from the soil, to being absorbed into vegetation, traveling through the xylem and making their way into the leaves and flowers, where they can then infect pollen and nectar as well as anyone or anything consuming any part of these.

These systemic pesticides were first used in 1998, but have now become used widely for growing conventional foods. Unfortunately, the more pesticides are used, the more ineffective they become—and we’re using plenty of them. In fact, pesticides are a $35 billion industry run by global corporations, and people pour 2.5 million tons of these chemicals into the environment each year.[vc_column_text]That’s a problem for many reasons, including the fact that they don’t work. We’re losing more crop yields than ever to insects, even though pesticide use is at its peak. To add to the problem, pesticides don’t stay just where they’re applied. A full 99.99 percent can get off target and damage our environment and, ultimately, our health.

It’s happening, too. For example, scientists and farmers alike are seeing the death of entire bee colonies due to pesticides. Truth be told, billions of bees are vanishing because they can’t handle the poisonous nectar they’re pollinating from contaminated flowers.

Bees aren’t the only ones feeling the fallout of pesticides, however. Pesticides can disrupt the human thyroid, adrenal and pituitary glands—glands which control hormones in the body and support healthy growth, development, gender distinction, behavior and reproduction.

Many people are no doubt aware of how pesticides can damage their health, which is why they opt to wash their fruits and veggies prior to eating them, thinking this will wipe away pesticide residues.

But not so fast. These pesticides go way beyond being only residual and able to be washed away. Systemic pesticides are bad through and through and are in the entire matrix of the soil, plant, leaves, flowers, and even in the nectar and pollen.[vc_single_image image="8789" img_size="full" alignment="center"][vc_column_text]Some of these systemic pesticides include, but are not limited to, these four:

Imidacloprids: These are applied to veggies such as tomatoes and leafy greens.
Thiamethoxam: These are used as seed “treatment” for corn, but is also applied to soil for fruit and veggies.
Clothianidan: This is a seed contaminant, used on canola, cereal, sugar beets and potatoes.
Dinotefuran: This is either applied to soil or is sprayed directly onto leafy greens and other veggies, including cucumbers.

They’re showing up in force, too. Tests from 1999 to 2007 by the U.S. Department of Agriculture showed stunning levels of systemic pesticides in conventional products. A whopping 70 percent of broccoli and 74 percent of fresh lettuce had imidacloprid residues, while heavy levels of thiamethoxam were in strawberries and sweet peppers.[vc_column_text]Likewise, 48 different pesticides were found on spinach, including five known or probable carcinogens. Meanwhile, tests found imidacloprid levels of up to 550 parts per billion in eucalyptus nectar and pollen—which is three times the amount needed to kill honeybees. The Journal of Economic Entomology reports, "When bees consume guttation drops, collected from plants grown from neonicotinoid-coated seeds, they encounter death within a few minutes."

Additionally, systemic nitroguanidine pesticides can last up to 500 days or more in soil, affecting the ecosystem for up to two seasons, poisoning water, soil, worms, beetles, and bees, which all play important roles in a thriving environment. Even the water droplets from a plant’s surface often test positive for systemic pesticides.