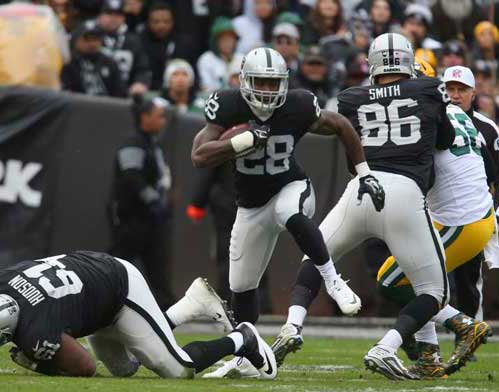 The Oakland Raiders had little to smile about with a dismal 3-13 record last year, but fortunately, there was light at the end of the tunnel. The light turned out to be a high-speed train—or more specifically “Tay Train,” a nickname that aptly describes formidable running back Latavius Murray. One look at his 6’ 3”, 230-pound frame coupled with a 4.38-second 40-yard dash elicits comparisons to superstars such as Adrian Peterson and has the league buzzing about if the Raiders will finally have a running game this year.

A sixth-round selection for Oakland in the 2013 draft, Murray was sidelined with injuries his first two years before erupting off the bench to rush 413 yards during the last six weeks of the 2014 season.

It was enough to give Raiders fans a glimpse of a promising future and to send fantasy league football fanatics scrambling to snap him up for their rosters. Excitement continued to build as Murray delivered impressive performances in pre-season games against the Rams and the Vikings, cementing his position as the team’s feature back and primary ball carrier. Poised to raise eyebrows with some pundits predicting a 1,000-yard season, we talked to Murray about how he relied on Garden of Life® supplements and trained like a maniac during the off-season so he could finally shine in 2015!

Latavius Murray: I feel a lot faster. Last year, I had ankle surgery, so there was some soreness with that, and it held me back. This y ear, I feel like I have no limits, and there’s nothing holding me back!

Extraordinary Health Magazine: You’ve mentioned that you worked harder than ever during the off-season. What was different this time?

Latavius Murray: I worked out a lot with my trainer, Vinnie Scollo, in Syracuse. He trains a lot of pr o athletes, and he got me started on Garden of Life supplements. I like the Organic Plant Protein because it’s so clean! I showed it to my weight coaches, and they thought it was great.

Extraordinary Health Magazine: Did you use any other supplements in addition to the Organic Plant Protein?

Latavius Murray: Vinnie makes a lot of supercharged smoothies for his clients, so most mornings I’d start with a protein shake plus some Vitamin Code® RAW D3™ and Wobenzym® N. For post workout, I’d have a chocolate Organic Plant Protein shake with some Perfect Food® RAW Chocolate greens mixed in and a couple of Vitamin Code RAW Vitamin C™ capsules and Vitamin Code RAW B-Complex™. Before dinner, I’d take mykind Organics Men’s Multi and Wobenzym® N and later, during the evening, I’d have another protein shake with a tablespoon of extra virgin coconut oil added for healthy fats. I am still taking them religiously every day and just started the Dr. Formulated probiotics!

Extraordinary Health Magazine: That’s quite a routine! Do you have a specific diet you follow as well?

Latavius Murray: People are telling me that I look bigger but very lean this year. I think it’s because I really paid attention to what I was eating and when I was eating. I focused on eating clean with a lot of chicken, steak, whole wheat pasta and healthy carbs such as green beans and sweet potatoes. I tried not to eat heavy at night or eat anything at all after 9 p.m. so that I could sleep better.

Extraordinary Health Magazine: What’s the overall vibe in the locker room this year?

Latavius Murray: It’s optimistic, and there’s a lot of good energy on the team. We have a new coaching staff, and most of them have been in our shoes and played in the league themselves. It’s great because they’re not asking us to do anything they haven’t done.

Extraordinary Health Magazine: You’re a fantasy football favorite this year. What do you play in your free time?

Latavius Murray: I’m a huge soccer fan, so I like playing IFA Soccer. I get on Xbox LIVE and talk to my friends back home in Syracuse. We love it!