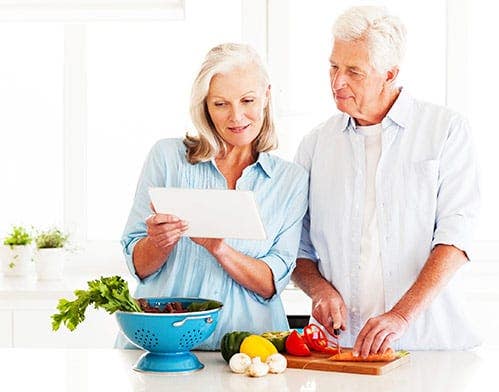 The MIND diet—maybe you’ve heard of it. It’s become pretty popular. MIND is an acronym for the Mediterranean-DASH Intervention for Neurodegenerative Delay diet and emphasizes certain “brain-healthy” foods found in both the Mediterranean diet and the DASH (short for Dietary Approaches to Stop Hypertension) diet. Some of those foods include leafy greens; veggies; nuts; berries; beans; fish; poultry; olive oil and wine. It also points out “unhealthy” foods, including red meat; margarine; cheese; pastries and sweets; and fried or fast food. The MIND diet also recommends consuming whole grains, while limiting butter intake. (Note: Some people choose to avoid grains, so that is something to think about when considering the MIND diet.)

The MIND diet’s focus is to reduce the risk of Alzheimer’s development and was created by, studied by and reported on by researchers at Rush University Medical Center, including Martha Clare Morris, Sc.D., a Rush nutritional epidemiologist. In recent studies, the MIND diet helped lower the risk of Alzheimer’s by as much as 53 percent in participants who rigorously followed the diet and by approximately 35 percent in those who followed the diet moderately well. Additionally, sticking to the MIND diet may slow cognitive decline in aging adults—even those not at risk for developing Alzheimer’s disease.

Morris and her colleagues designed the MIND diet based on years of information and research about what foods and nutrients have good or bad effects on brain function. And while it was designed to help combat Alzheimer’s development, the MIND diet has also been found to reduce the risk of cardiovascular conditions such as hypertension, heart attack and stroke. As an added perk, its foods are also often associated with weight loss.

It’s also been ranked by U.S. News & World Report as the easiest diet to follow and the second-best overall diet—tying in both categories. It’s easy to see why because the focus is on increasing intake of brain-healthy food, not on limiting calories, timing out each meal or rules about snacks or eliminating food groups.

Overall, sticking to the MIND diet means, among other things, eating green leafy veggies and one other veggie every day, consuming a glass of wine, and snacking most days on nuts. Additionally, having beans every other day or so, eating poultry and berries at least twice a week and eating fish at least once a week are on the MIND menu.

Likewise, the study pointed out that MIND diet eaters must limit intake of foods such as margarine; sweets and pastries, whole fat cheese, and fried or fast food (less than a serving a week of any of those three.) Aim for eating at least a half-cup of berries at least twice a week.

And when it comes to fruits, berries are the only fruits to be specifically included in the MIND diet. Morris points out, “Blueberries are one of the more potent foods in terms of protecting the brain.” However, strawberries have also performed well in past studies when it comes to cognitive function.

Kate Patton, R.D., a registered dietician with the Cleveland Clinic, says, “The combination of lean protein, heart- and brain-healthy omega-3s, antioxidants and fiber, as well as low levels of added sugar and saturated and trans fat reduce inflammation to help cut your risk of dementia.”

To add to that statement, a 2015 review published in Nature suggests that inflammation may trigger and speed up the development of Alzheimer’s disease.

It’s important to point out, too, that while there was no mention of choosing organic foods for the MIND diet, it may be prudent to choose organic foods, since pesticides, herbicides and other toxins found on conventionally grown foods are increasingly linked to diseases that attack the nervous system and brain—including Alzheimer’s.

So, that’s the lowdown on the MIND diet.

This information is intended for educational and informational purposes only. It should not be used in place of an individual consultation or examination or replace the advice of your health care professional and should not be relied upon to determine diagnosis or course of treatment.
#Mediterranean Diet , #brain health , #Healthy Eating , #longevity , #alzheimers