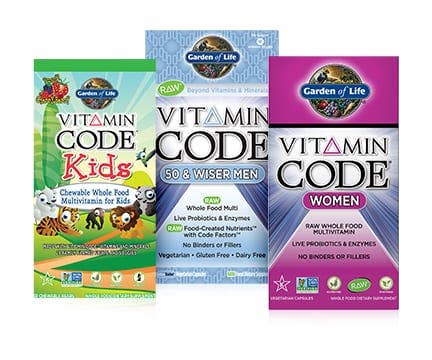 
The RAW Truth About Multivitamins

Imagine yourself 100 years ago telling friends about a new movement in natural health—the “RAW” food movement. Raw foods, natural living foods that are:

Right after you finished telling your friends about this great new way to eat food, they would stare at you, not sure what you’re driving at. After all, what you’ve just described is many of their favorite farm fresh fruits, salads, vegetables, nuts and seeds. Foods they already eat every day. How things have changed in a century.

Today, an ever-growing number of people are jumping aboard the “raw food” bandwagon because modern food processing and farming methods have robbed much of our food of the nutritive qualities that make it healthy for our bodies.

Let’s start with the advent of agribusiness and mega-farming combines that reap bountiful crops which are increasingly less and less nutritious for us. In today’s modern system of agriculture, the use of pesticides, herbicides, fungicides and chemical fertilizers have significantly increased crop yields. The flip side is that this “chemical” way of farming is growing fruits and vegetables that aren’t as nutrient dense as they once were. A comparison of USDA food composition tables from the 1960s and 1970s to the present day reveals that the vitamin and mineral content of the nation’s breadbasket has declined 25 percent to 50 percent in the last generation.

The fact that our food is less nutritious is made worse when you consider what happens to our food after it leaves the farm. In the name of convenience, safety, and marketing, our food is subjected to all sorts of preserving, irradiating, heating and treating that changes the nature of the food. Most major food companies pay more attention to packaging and marketing than the preservation of the nutrition contained in the foods. We have so much abundance in this country, yet we are overfed and undernourished. Talk about a heaping portion of American Irony.

In order to combat the lack of nutrients in our food supply, a billion-dollar industry has emerged to bridge the nutritional gap. Many believe that purchasing and consuming an inexpensive vitamin and mineral supplement means that you won’t have to worry about the nutrition in the “foods” you’re eating. The “disconnect” is that most commercial multivitamins have little resemblance or connection to the foods they intend to complement. The vast majority are chemically isolated, synthetic derivatives of various vitamins and minerals found in food. They are inorganic and are not natural. At the end of the day, food has been replaced with inorganic chemicals.

Common sense is beginning to prevail, however, thanks to the real food message and the organic movement, which have directed much-needed attention to the serious degradation in the quality of our food. The raw food phenomenon is an even greater expression of the lengths we will go for better health.

But does a diet rich in real, organic and RAW foods eliminate the need for a multivitamin? Not exactly. Because even the RAW foods we eat are not as nutritious as they once were and worse may be entirely missing key nutrients due to poor growing conditions and lack of soil fertility.

Until the Vitamin Code, there have been few options available for those who wish to supplement with a RAW, living multivitamin. The Vitamin Code represents a breakthrough discovery that will change the way you take vitamins forever.

The power of raw food is truly found in its simplicity. When you eat food that is uncooked, untreated, and unadulterated, you are eating food in harmony with nature’s intention and your body’s design. Raw food enthusiasts will tell you that there are many benefits derived from eating raw.

When you consume raw foods, you are consuming all of the vitamins, minerals, enzymes, probiotics and phytonutrients in their most potent form. Simply heating foods can result in the loss of many of these important co-factors. When you consider the chemical treatments and preservative ingredients added, you are often left with food that is a shell of its former self. Most people readily accept this premise. Who among us would argue that eating canned, pasteurized fruit cup in syrup is better than eating a raw, organic apple?

While all food provides some nutrition, raw foods provide higher levels of the 45 nutrients we need to supply our body with every day to achieve extraordinary health.

Our bodies were designed to take in food and then break it down in order to glean nutrition from that food. Co-factors such as probiotics and enzymes aid this process. The probiotics and enzymes naturally present in raw foods aid the digestion process, allowing the body to break down the food and assimilate the nutrients into the bloodstream. Raw foods, as found in nature, provide the complete package of vitamins, minerals and co-factors necessary for the body to maximize nutrient potential.

Eating food should not be compared to taking a supplement because no supplement can compare to the benefits associated with consuming RAW foods. However, if you have a nutritional deficiency or you just don’t eat a healthy, balanced diet as you should, you probably need to supplement to give your body the basic nutrition it needs to function properly.

If you are going to supplement, you should seek out a RAW, whole-food multivitamin. The Vitamin Code™ is the first multivitamin that was developed to provide nutrients in their raw food-created form.

Is Your Multivitamin Raw?

Creating a multivitamin that is truly raw is a vexing proposition. In essence, what you’re trying to do is create living nutrients that contain co-factors normally associated with those nutrients, without using high heat, excess processing, fillers or binders. It takes vision and intense dedication to deliver on such a goal.

Endre “Andy” Szalay, a Hungarianborn pharmacist and researcher, devoted more than two decades to perfect the process that would become known as the Vitamin Code and lead to the creation of these innovative Raw Food-Created Nutrients™.

Andy Szalay began the development of Raw Food-Created Nutrients in 1977. With a strong background in biology from studying pharmacy at university, Andy knew that when a plant takes root, its roots reach into the soil and pull out the inorganic mineral salts inherent in that soil. When the plant was exposed to sunlight, the leaves and fruit of that plant produced vitamins and minerals through its metabolic process. In other words, the vitamins and minerals were literally grown within the plant. Andy wanted to mimic this same process in a laboratory setting, using inorganic vitamins and minerals and growing them within a simple plant like food. Simple in theory, yet the application took Andy more than 20 years to perfect.

Andy first started with what he considered to be the perfect single-cell organism known as Saccharomyces cerevisiae, or baker’s yeast. Yes, we’re talking about the same baker’s yeast that can be found in any grocery store. The tricky part for Andy was finding a way to add an elemental vitamin or mineral to the baker’s yeast and actually cultivate or create it. His first attempts ended in failure. Andy found that whenever he added inorganic vitamins or minerals to the yeast mixture, they failed to pass through the cell wall of the yeast or worse, killed the yeast altogether.

Andy knew that certain proteins easily passed into the cell walls of yeast. He hit upon the idea of attaching peptides, which are amino acid chains, to the inorganic vitamins and minerals before introducing them to the yeast. His idea paid off. Attached to the vitamins and minerals, the proteins allowed them to pass through the cell walls and embed in the yeast. During this process unique co-factors were also created, such as glycoproteins, enzymes, and antioxidants—inherent beneficial by-products of the yeast’s life cycle.

Andy could have stopped there. Instead he repeated the whole process outlined above, only this time instead of using yeast, he used a different organism, the probiotic Lactobacillus bulgaricus. Andy knew that by using a different growing medium he could create a wider array of co-factors. In other words, selenium grown in yeast has different co-factors than selenium grown in L. bulgaricus. By growing each batch separately and then combining them after the growing process was complete, the widest possible array of co-factors was achieved, resulting in extreme nutrient synergy.

These nutrients, created in various organisms, have one more huge benefit. Since they are not cooked, treated or adulterated, they are indeed raw, making them a true innovation in vitamins and minerals.

Is Your Multivitamin Raw?

When Garden of Life first became aware of the raw food-created vitamins and minerals that Andy Szalay had discovered, he was excited about this breakthrough in whole food multivitamins. As a pioneer in the supplement industry, Jordan recognized the benefits of a whole food multivitamin produced from Raw Food-Created Nutrients™ that were uncooked, untreated, unadulterated, and contained live enzymes and probiotics.

Garden of Life was also excited about the ability to use two different probiotics in creating the vitamins and minerals. Using both S. cerevisiae and L. bulgaricus ensures that the final product has the widest possible array of co-factors. The complete list of attributes associated with a truly RAW multivitamin was very exciting.

Finally, Garden of Life was intrigued by the ability to specifically target multivitamin formulations not just for men or women, but also for older
men and women, dieters, and young families. Because Andy had individually grown his nutrients in single batches, Jordan and his team of formulators could put together various Vitamin Code formulations with targeted amounts of key vitamins and minerals needed to focus on each specific group’s nutritional needs.

“We're confident that the Raw Food-Created Nutrients in the Vitamin Code multivitamins from Garden of Life represent the next breakthrough in nutritional supplementation with the extreme nutrient synergy you won’t find in any other product,” said Garden of Life. “Not only do these multivitamins impart the wisdom of nature, but Raw Food-Created Nutrients in the Vitamin Code formulations bring the health principles of the past while taking full advantage of the technology of today.”
#Multivitamins , #Vitamins