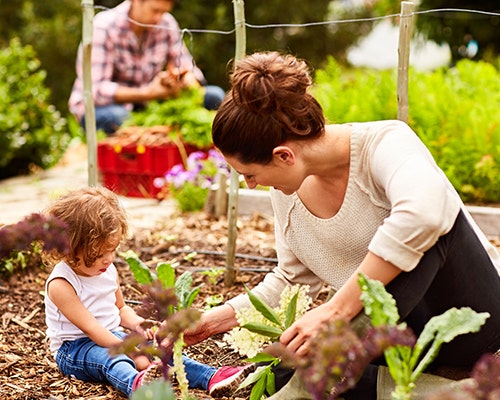 Organic food has been mainstream for a while now, and is becoming the preferred choice over conventional food in nearly every category. Various industry sources estimate that U.S. sales of organic products totals more than $30 billion annually, according to the Nutrition Business Journal. Produce accounts for nearly 43 percent, ranking as the largest sector of all organic food sales.

Further, it is important to consider organic for nearly everything the body is exposed to externally, as well, including even flowers brought into the home. When grown organically, flowers have no toxic chemical usage, which translates to long-term sustainability of farmland, increased safety for farmers, the environment, and ourselves, according to Organic Bouquet.

It makes sense why many consumers are especially tapped into organic fruits and vegetables, as they comprise a significant portion of the daily recommended food intake for optimal health. There are many benefits of going organic, but some of the top reasons include no risk of GMOs, toxic chemicals, and a more nutritionally sound as well as tastier experience.

Unfortunately, genetically modified organisms comprise over 90% of the most common crops in the US today, according to the Center for Food Safety. Despite various studies which have linked GMO foods to negative health effects, there continues to be FDA controversy regarding the safety of these crops, including many conventional vegetables and fruits. Choosing organic helps to eliminate the potential risk of these altered foods.

In addition, studies have shown that synthetic fertilizers can even impact nutritional value and taste. Organic foods may contain 18 to 69 percent higher concentrations of antioxidants, as reported by the British Journal of Nutrition. This is likely since synthetic fertilizers as well as pesticides inhibit a plant's production of phytonutrients, such as antioxidants, according to Organic.org. In turn, organic produce cultivated without these inhibitors is higher in antioxidants, which may explain their richer and more intense flavors, according to the British Journal of Nutrition.

Starting your own organic garden

For many people, growing their own produce can be one of the most rewarding and enriching experiences, as it allows for total control over one of the major food sources. It is also very cost-effective, as buying organic can be very expensive. Growing your own garden also allows for cultivating crops that may be difficult to attain locally, or specific varieties unavailable throughout the year. With mini greenhouses, indoor grow tents and lights, it has become relatively easy to manage a climate-controlled garden, if you choose.

After deciding upon an outdoor or indoor garden, evaluate individual needs and resources. Starting small and expanding is almost always better than committing to an unmanageable large scale garden. For smaller spaces, container or window gardens are a great choice for herbs, cherry tomatoes, and of course flowers.

Good Housekeeping suggests picking up a few essential tools, including a trowel set, soil test kit, a compost bin, garden gloves and a lightweight watering can. The soil test kit is especially important, as soil is the foundation for successful growing. For best results, plan to compost about two months prior to planting, using organic materials such as fallen leaves, grass clippings, and manure.

Some people prefer to start with seeds, while others prefer to plant crops. Keep in mind that some foods and flowers are better to grow from seed, including sunflowers, dill, sweet peas, squash and cucumbers, says Good Housekeeping. When going with crops, group like kinds together to reduce weeding and water waste. Zucchini and tomatoes are some good choices for beginners. To avoid pests, ensure plants remain healthy, with adequate light, nutrients, and moisture. While some insects can actually be beneficial to a garden, if needed seek out horticultural oils, garlic or hot pepper sprays to help repel excessive pests.

Some of the best warm season produce to grow includes the aforementioned seed and crop suggestions, as well as snap peas, corn, cucumbers, peppers, and melons like honeydew, according to Sunset. Cabbage, lettuce, spinach and raspberries are also good spring and summer crops, says Urban Farmer. For flowers, there are plenty of beautiful varieties that add color, but marigolds, black-eyed susans, aster, hibiscus and zinnias are some great choices for the warmer seasons.

So get out there and start planting—there's no better time than now!
#Organic , #Environment , #Fresh produce , #gardening