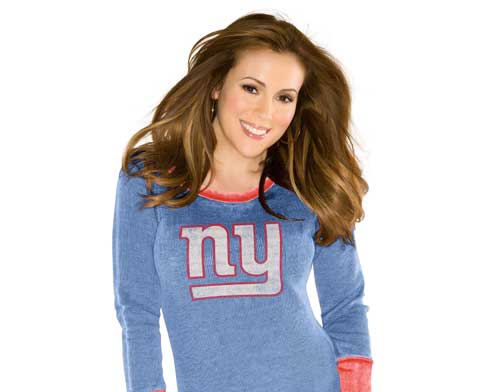 When we checked in with Alyssa Milano to catch up on her latest news, we quickly learned that she has more titles than the Duchess of Windsor. She describes herself as “Mom, wife, actress, producer, activist and designer” and could easily add “author, sports fan and philanthropist” if she chose to clutter up her business cards. Then again, a calling card isn’t necessary when you’re one of the most recognized actresses in Hollywood with a career that has spanned three decades.

Millions of fans, ranging from Millennials to Baby Boomers, have watched Alyssa grow up on television and in films. From her first breakout role as precocious 10-year-old Samantha Micelli in the hit sitcom Who’s the Boss? in 1983 to the long-running series Charmed from 1998 to 2006, she made the often rocky transition from child actor to adult star without scandals or pitfalls. Consistently ranked on the top five list of E!’s “50 Cutest Child Stars: All Grown Up,” the 42-year-old star is currently focused on raising her own two children, which is why she always introduces herself with her most important title—Mom.

Family is the most important thing to Alyssa, who hails from an Italian-American family and grew up in a working-class neighborhood in Brooklyn. Her mother, Lin, is a fashion designer while her father, Thomas, is a film music edit or. Both of them supported her career throughout the years and uprooted the family 3,000 miles from New York to Los Angeles when she landed her first big role on Who’s the Boss? Although she credits her parents for giving up their lives on the East Coast so that she could follow her dream, she recently made a decision not to relocate for the third season of the popular ABC television drama Mistresses she was starring on. When the show abruptly decided, for financial reasons, to shoot all of its upcoming episodes in Vancouver, Canada, Alyssa opted out of her contract and didn’t think twice about what was best for her family.[vc_column_text]When we spoke with Alyssa, it was clear that her departure from the show did not leave a void in her life. On the day we chatted, she had just been nominated for a 2015 People’s Choice Award for Best Actress in a Television Drama for her role on Mistresses and her ongoing gig as a host and judge for Lifetime’s Project Runway All-Stars was in full swing. An avid sports fan, she was excited about the upcoming Super Bowl and working on new maternity designs for her successful Touch sportswear line for female fans. On top of all this excitement, she was grabbing news headlines and blowing up the Internet with photos of her breastfeeding her two-month-old daughter, Elizabella Dylan. Even though the images were extremely tasteful and drummed up thousands of comments supporting breastfeeding as the healthiest option for babies, there were still some negative comments from detractors who said her Instagram posts were inappropriate. We asked her to expound on why she thinks children’s health issues should be at the top of everyone’s list, how she takes care of her own health needs and much more.[vc_single_image image="11402" img_size="large" alignment="center" onclick="link_image"][vc_column_text]Extraordinary Health Magazine:  The photos of you and your daughter on Instagram have spawned an outpouring of selfies and support for breastfeeding on social media. Of course, there are others who think those images should remain private. What do you think about all the fuss?

Alyssa Milano:  I can’t wrap my head around how it’s not okay to see a woman breastfeeding in public. This is what the human body is made to do, so it’s a shame there is such a stigma attached to it in this country. It’s not like this in other parts of the world. Here, everyone agrees this is the healthiest choice possible for infants, but we make it very inconvenient for mothers who always have to look for a private spot or wear certain clothes so they can hide their bodies.

Extraordinary Health Magazine:  Do you hope to inspire a call to action with the photos you posted on Instagram?

Alyssa Milano:  All of the selfies and encouragement from other moms has been great, so at the end of the day, I hope women feel empowered enough to fight the good fight and insist on what’s best for their babies.

Extraordinary Health Magazine:  Did having a new baby enter into your decision to stay home in Los Angeles instead of relocating to Vancouver for the third season of Mistresses?

Alyssa Milano:  I had to consider everyone, including my husband. He’s an agent in the industry, so I had to think about his livelihood as well. I’m happily married and couldn’t envision rocking the boat by moving away for months and jeopardizing our relationship—not to mention the kids![vc_column_text]Extraordinary Health Magazine:  You have your three-year-old son, Milo, and newborn daughter, Elizabella. In addition to giving them the healthiest start possible with breastfeeding, what else do you think is important for raising healthy kids?

Alyssa Milano:  I made all of Milo’s baby food and did not give him anything to eat from a can or a jar until he was two years old. I didn’t want him to be exposed to any preservatives or chemicals at such a young age. Overall, I think people should just go with their instincts and do the best they can for their kids. There’s so much information now on the Internet and everywhere about what’s good for them and what’s not, so it’s easy to find the best products available.[vc_single_image image="11404" img_size="large" alignment="center" onclick="link_image"][vc_column_text]Extraordinary Health Magazine:  You flirted with vegetarianism for a while and appeared in a few ads for PETA. What’s the best way to describe your diet now?

Alyssa Milano:   I was a vegetarian up until my last pregnancy. When I was pregnant with Bella, I started craving lean meats and added them in moderation. I eat very clean with no preservatives, very little sugar, no genetically modified foods, and I like to always know where my food comes from.

Extraordinary Health Magazine:  Do you have any “splurge” foods?

Extraordinary Health Magazine: How do you stay in shape?

Alyssa Milano:  I work out regularly with yoga, spinning or Pilates classes. And I chase after Milo!

Extraordinary Health Magazine:  Do you have any health and beauty tips for our readers?

Alyssa Milano:  I take vitamins and drink lots of water. I think it’s very important for overall health and to keep your skin looking good. All of the makeup and harsh lighting is rough on my skin, so doing all these things plus getting enough sleep is what works for me.

Extraordinary Health Magazine:  Your Touch professional team sportswear line for women has been very successful. Why did you create it, and is there anything new you are launching?

Alyssa Milano:  I started it “out of necessity” in 2007 with G-III and Major League Baseball. I wanted to support my favorite teams, but there was nothing fashionable for women. I had to either wear oversized men’s jerseys or go to the kid’s department to shop for smaller sizes. Now we are working with all the major sports teams and adding a new maternity line in 2015 that I’m very excited about![vc_single_image image="11405" img_size="large" alignment="center" onclick="link_image"][vc_single_image image="11407" img_size="large" alignment="center" onclick="link_image"][vc_column_text]Extraordinary Health Magazine:  What’s the best thing about hosting Project Runway All-Stars?

Alyssa Milano:  I’ve always loved fashion, so being surrounded by all of the designers and their creativity is awesome!

Extraordinary Health Magazine:  You’re a huge baseball fan but also follow all the major sports. Do you ever have a chance to attend any sporting events?

Alyssa Milano:  When I have date nights with my husband, we like to go to LA Kings hockey games. We’re season ticket holders, so we go as often as we can.

Extraordinary Health Magazine:  What charities or special causes are the most meaningful to you?

Alyssa Milano:  I’ve been an ambassador with UNICEF since 2003 and have been all over the world with them. I have seen the life-saving work they do with very little pay, and they are amazing. I think every child deserves a happy, healthy, protected childhood and this is what UNICEF strives to accomplish.

Alyssa Milano:  I would love to go to Italy one day. My grandparents are from there, and I’ve always wanted to go.

Extraordinary Health Magazine:  You should definitely go. All of the clean foods you were talking about before with no preservatives are in Italy—and everything is delicious!

Alyssa Milano:  I’m going! I will make sure I get there one day!
#Moms , #Influencers