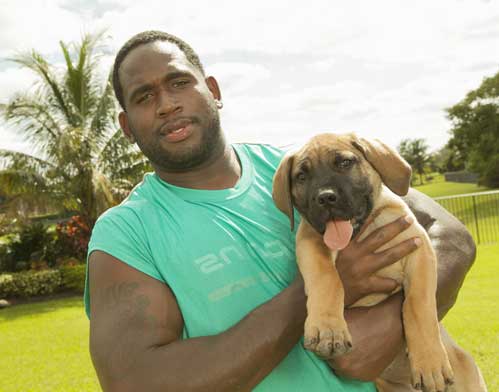 When we arrived at the home of Miami Dolphins left tackle Branden Albert to set up a photo shoot, a celebratory mood prevailed. A bouquet of colorful balloons hinted that it was his 30th birthday. Perhaps even better, the Fins had just clobbered the San Diego Chargers 37-0 the day before, and he was still savoring the victory.We immediately noticed the spacious, sparsely furnished house was not ready for a segment on MTV Cribs. Walking through the garage, we saw a tower of unopened boxes recently delivered from his former home in Kansas City, where he was a franchise player for the Chiefs. After six seasons in Missouri that culminated with him making the Pro Bowl last year, Branden told us he was thrilled to sign a new five-year contract with the Dolphins. “I used to come to Miami to live during the off season,” he said. “I always hoped it could work out that I would be able to play for the Dolphins one day. From dutifully watching Dolphins’ games and ESPN, we know that Branden is arguably the team’s best player, and has been a rock on quarterback Ryan Tannehill’s blindside since the season started. We’ve been working with him for more than a year as a Garden of Life® Brand Ambassador, sending him supplements every month and marveling at his devotion to practicing yoga. The fact that the 6’ 5”, 310-pound lineman rarely misses a yoga session—whether he’s at home or on the road—is why we’re here for a photo shoot. We can’t imagine imposing figures like Branden or the Incredible Hulk striking graceful yoga poses, so we have to see it for ourselves.As our photographer sets up equipment outside by the pool, a playful puppy darts through a doggy door and starts chewing on our lighting cords. “Stop it, Ace!” scolds Branden with a stern face that results in the adorable pup wagging his tail and begging for attention. He explains that newly acquired “Ace” is a Boerboel, a rare breed from South Africa. Traditionally, the dogs were used as working farm dogs and trained to guard the homestead. Although we point out that someone of Branden’s size would be safe with a miniature poodle, he tells us that Ace will eventually grow to 150 pounds of a semi-ferocious guard dog, and it’s just going to take some training and patience to get him to stop chewing on cords to avoid electrocution.As the photo shoot gets underway, Branden assumes a perfect Tree Pose that is ruined only by his huge, bulky sweatshirt. We explain to him nicely (because one should always address 300 pounders nicely) that we can’t see the clean lines of his yoga poses because the sweatshirt is covering his arms. Plus, it’s 90 degrees outside, and he’s not in bone-chilling Missouri anymore, so he’s easily persuaded to go sleeveless. He emerges from his bedroom wearing a tee shirt that is turned inside out with the tag showing. Our photographer has a panic attack while I ask Branden nicely to fix the shirt. He shrugs with a sheepish grin and turns the shirt around. I have managed to subdue Ace with a doggy toy, so we are finally ready to shoot.We’re amazed as Branden assumes several dramatic poses for us, even though we don’t ask him to do anything difficult or on a contortionist level, since we know he’s feeling a few bumps and bruises from yesterday’s game. We talk about how he turned to yoga several years ago because it helps him stay grounded, peaceful and calm despite his circumstances. He’s studied at numerous yoga studios and conducted his own impromptu classes on the road. Recently, he delved into hot yoga classes, which involve sweating bullets and lots of stamina. The conversation eventually turns to nutrition when our photographer asks him where to get good smoothies.“You can’t get much of anything healthy from most smoothie shops,” Branden said. “Lots of the well-known shops have smoothies loaded with sugar and calories. I learned about using Garden of Life’s RAW Meal and RAW Protein at The Smoothie Shop & Supplements in Lees Summit, Missouri. You have to go to a place like that where they use real food and healthy ingredients or make your own at home.”When the photo shoot is over, Branden cheerfully autographs a football for our office, and we are on our way. We talk about how it’s great that he’s settling into his new home, his role with the team and everything seems to be going his way. In one week, everything changes when he’s injured during a game with the Detroit Lions. It looks bad when a pass play in the second quarter goes wrong and a player rolls the back of Branden’s knee. It looks even worse in slow motion and when they carry him off the field in a stretcher. Although there are no broken bones, team doctors report he sustained damage to the ligaments in his ACL that will require reconstructive surgery and 9 to 12 months of rehab.Two days later, Branden called to see if we would send him some Wobenzym® N, systemic enzymes that help aches, pains and muscle soreness. We thought he’d be crushed by the injury, but he seemed to be taking it all in stride. He said that he was overwhelmed and grateful for the support he had received from family, friends and fans, and that he would definitely work to come back better and stronger. “This is football, and these types of setbacks and injuries are just part of the game,” he said. “I’ll work hard to come back and help my team.”With a long road ahead of him, Branden will practice yoga again as soon as he’s able as part of his rehab program. And while he’s working to come back as the best tackle in the league, he’ll also have plenty of time to teach Ace how to guard his home.