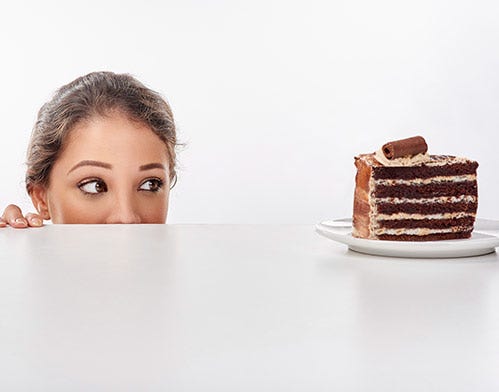 Food cravings. Most likely, we’ve all experienced them—sometimes with a vengeance. In fact, surveys estimate that a full 100 percent of young women and nearly 70 percent of young men had food cravings during the past year. Food cravings can be forceful and unrelenting, too. But just what’s behind them? Well, there are many reasons underlying those food cravings, but here are some you might be interested in.

Let’s start with your brain. Three parts of the brain—the hippocampus, insula and caudate—seem to be activated during food-craving times, says the Monell Chemical Senses Center. This indicates that memory areas of the brain responsible for associating specific food with a reward are more essential to food cravings than the brain’s reward center is. Likewise, since the 1940s, scientists have known that the hypothalamus portion of the brain plays a key role in regulating food intake and body weight. In addition, certain brain chemicals have a profound influence on emotions and, hence, why and when we eat.

The hormone leptin is also a crucial signal to the brain to control eating. In the body, leptin comes from fat cells in direct proportion to the amount of stored energy. Studies in both people and animals have shown that lack of leptin triggers a voracious appetite. When leptin levels return to normal, however, the potent urge to eat goes away.

Then there’s stress. Many people lose all restraint when under stress or when anxious. Adam Drewnowski, Ph. D. of the University of Washington, a well-known researcher on taste and food preference, says, “Food cravings arise to satisfy emotional needs, such as calming stress and reducing anxiety.” For example, carbs, sugars and unhealthy fats boost levels of the hormone serotonin, creating a calming effect. You might recognize this as stress eating or comfort eating, which occurs when people turn to so-called “comfort food” to deal with their anxiety, but they get caught up in a vicious body-chemical cycle that can spiral out of control. Here’s why: under chronic stress, the body produces more steroids and insulin which increase the appetite, prompting you to eat more—usually junk food.

Interestingly, so-called “comfort foods” such as double cheeseburgers, deep-dish pizza, ice cream and glazed doughnuts contain palmitic acid, which can also affect the brain. This fatty acid goes straight to your head, telling your body to ignore appetite-suppressing signals from leptin or insulin—hormones noted for weight regulation—for up to three days. Since your brain isn’t told to stop eating during this time, you just keep eating.

We’re also genetically programmed for excessive eating. Throughout history, humans survived times of famine due to their ability to store excess calories as body fat during times of plenty—and to live off the “fat of the land” during lean times. At some level, our bodies appear to be programmed to crave foods, especially those high in calories. This mechanism worked well for us thousands of years ago, but works against us now that we have an abundance of food around us all the time, especially junk food and fast foods, which are typically what we crave.

Speaking of junk foods and fast foods, let’s not overlook the fact that processed foods have additives in them that keep us wanting more and coming back for more. Take monosodium glutamate (MSG), for example. MSG is manufactured sodium salt that enhances the smell and taste of food—particularly fast, unhealthy food—and stimulates hunger, making you crave those salty junk foods. The FDA requires labeling of products featuring MSG, but is often listed under other ingredient names such as “yeast extract,” “natural flavors,” “hydrolyzed vegetable protein,” and “sodium caseinate.”

The truth is that chemicals—food additives—are often added to processed foods by manufacturers in order to cause food cravings. Paul Stitt, author of Fighting the Food Giants, worked for breakfast food companies and tells how this happens. Stitt also shares that employees were asked to taste cereals, and the cereals they ate the most of were thought of as the best and were marketed more aggressively. Likewise, many processed cookies have addictive ingredients added so that you’ll keep craving them and keep eating them.

Those are just a few of what’s behind those food cravings, so be sure to eat an organic, whole foods-based diet, have healthy snacks on hand and stay away from processed foods, fast foods and junk foods. That’s a good place to start to quell those cravings.

This information is intended for educational and informational purposes only. It should not be used in place of an individual consultation or examination or replace the advice of your health care professional and should not be relied upon to determine diagnosis or course of treatment.
#Food Cravings , #Food Additives , #Fast Foods