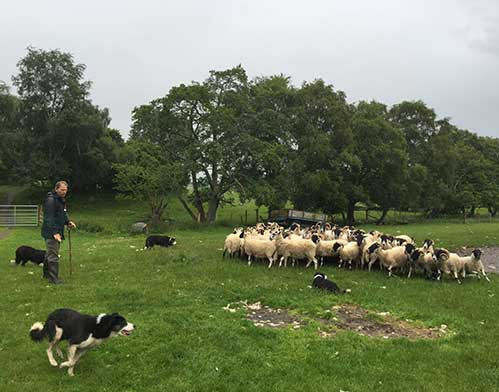 Sometimes it’s the unplanned moments in life that bring us the most pleasure. It can happen suddenly when we’re forced to take a detour or intentionally when we venture off course and choose the road less traveled. At Garden of Life, we occasionally experience amazing people and places when we are traveling on business or pleasure, and in nearly all cases we are enriched by our encounters.

Recently we were pleasantly surprised while vacationing in Scotland and hiking around many of the picturesque farms dotting the countryside. Nestled in the Scottish Highlands in Kincraig, we stumbled upon the Leault Working Sheepdog farm. It wasn’t on our schedule and the travel agent in the states had not mentioned it when we booked our trip. However, we hinted to our local guide that we would be interested in checking out any homesteads or ranches along the way because of Garden of Life’s interest and commitment to family farms. Our guide called in advance to see if the farm would be open for visitors, so that’s how our group was treated to an opportunity to watch champion handler Neil Ross put his highly trained border collies to work.

As we quickly learned, keeping more than 3,000 sheep in line would be an impossible task without the swift maneuvering skills of the border collies. Neil explained that each dog is taught to respond to its own unique whistle commands and that it takes almost three years for them to excel and become fully trained. As a light rain drizzled down from the mists of the Highlands, we cracked open umbrellas and pulled on rain ponchos for a fascinating demonstration. With Neil issuing a series of shouts and whistles, the dogs expertly guided the sheep through various obstacles until they began to resemble a disciplined military unit on parade. We marveled as the dogs expertly ushered the sheep in all directions and responded instantly to Neil’s whistles and shouts.

After the demonstration, we praised the friendly dogs for their hard work and held some tiny precious pups that were so brand spanking new that their eyes were not yet open. Next we watched as Neil selected a sheep and instructed us how to shear the wool with a pair of shears. All I can say it that it was a lot trickier than it looked!

Before we left, we also had the chance to feed a few of the farm’s orphan lambs with baby bottles. As the hungry lambs swarmed us for milk, we observed several Highland cattle (sometimes referred to as Highland Coos) in an adjoining field. We learned that while groups of cattle are usually referred to as a “herd,” a group of Highland cattle is called a “fold” because years ago they were kept in open shelters made of stones called folds to shield them from harsh winter weather. Compared to dairy cows we are used to seeing in the states, the Highland cattle looked rather curious to us with their longhorns and wavy bangs that almost covered their eyes. We were told that Highland cattle are the oldest registered cows in the world and were mentioned in documents in the Western Isles of Scotland as early as the 6th century AD. More recently, Queen Elisabeth was apparently such a fan that she ordered Highland cattle to always be kept at her country home at Balmoral Castle where they can still be seen today.

We left the Leault Working Sheepdog farm with some unforgettable memories and members of our group chattered enthusiastically about it for days. If you’re ever lucky enough to visit the Highlands, we’d recommend it as a “must see” planned trip and you can get more information here: http://www.leaultworkingsheepdogs.co.uk/