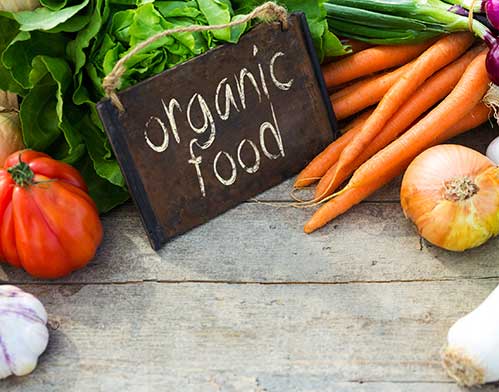 If you want to mind your weight and overall health, then one thing to consider giving up are conventionally grown “chemicalized” foods that are filled with chemicals. Not only can they be destructive to overall health, but they can also make—and keep—people overweight, if not obese.

Of course, there are a myriad of reasons to avoid conventionally grown foods and their nasty, health-robbing chemicals. You’ll find everything from genetically modified organisms (GMOs), pesticides, growth hormones, antibiotics, plastic pollutants and much more in conventionally grown foods—including chemicals called obesogens that disrupt hormonal systems, leading to weight issues.

As if causing weight problems, including becoming overweight or obese, weren’t enough, these obesogen chemicals can also pave the way to heart disease, diabetes and high cholesterol. In fact, the American Medical Association has acknowledged that obesogens may play a strong role in our nation’s obesity rates. And just where are these obesogens most prominent? You can find them in pesticide-ridden and PCB-tainted “dirty dozen” produce such as non-organic strawberries; apples; nectarines; peaches; celery; grapes; cherries; spinach; tomatoes; bell peppers; cherry tomatoes and cucumbers. You can also find them readily in conventionally grown kale; lettuce; imported carrots; and pears as well as farm-raised fish and corn- or soy-fed chicken and beef.

And when it comes to chicken and beef, don’t forget that meat from cattle treated with hormones results in consuming those hormones as well—hormones such as estrogen, progesterone and testosterone in mega doses. Additionally, an anabolic steroid called trenbolone acetate, or TBA, is given to conventionally raised cattle to “beef them up.” Unfortunately, TBA is eight to 10 times as potent as testosterone—and people consume it if they eat the meat of those cattle.

But, wait! There’s more. Many of these obesogens are fat soluble, so they will build up in fatty tissues of conventional meats.

And if you sink your teeth into a conventional steak, know that it typically comes from cattle usually receiving six different steroids—all of which are obesogens—and has about seven-and-a-half times as much fat as a “normal” beef has. Likewise, the antibiotics routinely given to poultry and cattle are obesogens, too, as is the soy fed to those animals and to farmed salmon.

But that’s not all you’ll get with farmed salmon. They too receive antibiotics as well as a dye to “pink” them up. Ultimately, farmed salmon can have up to 10 times the amounts of pesticides, such as PCBs, as wild salmon.

You can also find obesogen chemicals in plastic compounds such as BPA in canned foods—tuna, soup, beans and tomatoes—as well as canned energy drinks or baby formula and in sports drink bottles. In fact, our country produces six billion pounds of the obesogen BPA each year, and it can be found residing in a full 93 percent of our population.

Along those same lines, you can also find plastic pollutants, including phthalates (plastic softeners) that mimic estrogen—via xenoestrogens, which can lead to estrogen dominance and other related health problems. Phthalates can be found in the lining of canned foods and beverages, sport drink bottles and pesticides, which, in turn, show up in our blood, urine, saliva and more. Worldwide, we produce approximately one billion pounds of phthalates each year.