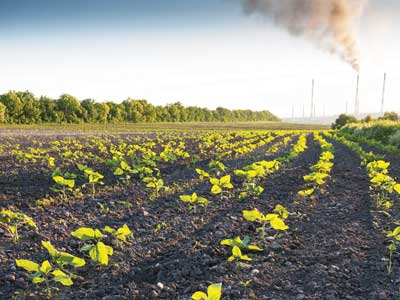 [vc_column css=".vc_custom_1502115535491{padding-right: 0px !important;padding-left: 0px !important;}"][vc_column_text el_id="text-content"]Organic farming . . . how is it different from conventional farming, and how does it benefit you, your family, your health and our earth?

Organic farming is becoming more and more prevalent, and that’s a good thing, too, because our lives, health and planet could be at stake otherwise. Yes; organic farming is that important. Before we get started on our “Organic Farming 101,” however, you’ll want to know that the undisputed worldwide leader in all things organic is an organization called the International Federation of Organic Agriculture Movements (IFOAM).

IFOAM sets the international definition for organic agriculture: Organic agriculture is a production system that sustains the health of soils, ecosystems and people. It relies on ecological processes, biodiversity and cycles adapted to local conditions, rather than the use of inputs with adverse effects. Organic agriculture combines tradition, innovation and science to benefit the shared environment and promote fair relationships and a good quality of life for all involved.

That’s a bit complicated, so let’s break it down.

Essentially, Organic Agricultural Practices are all about establishing “long-term sustainability.” In agriculture, sustainability is measured by the farmer’s impact on soil, water, air, biodiversity and GMOs (nonproliferation).[vc_column_text]

First up is soil. When you think about healthy food, you probably think about its nutrient content. Even more basic than that, however, is where those nutrients originated—in the soil where the plant grew. In order to grow healthy, productive, high-yield crops, all farmers—organic and conventional—fight two battles. The first is to ensure that soil is fertile, or rich in nutrients. The second is preventing erosion of those nutrients and erosion of the soil itself. You see, if the fields aren’t properly tended, then the soil depletes over time and is transported away by harvesting machines.

Conventional farmers address soil enrichment through advanced synthetic chemical fertilizers that add nitrogen, potassium, phosphorus, calcium, magnesium and sulfur. Invented during the Industrial Revolution, these chemicals are continually “perfected” by large corporate agricultural conglomerates that sell them—and that’s a problem because they’re loaded with toxins. In fact, there are over 150 known toxins applied to soil through these chemical fertilizers, and these acid-treated chemicals “burn” the soil, creating a highly acidic environment.

By contrast, organic farmers ally themselves with Mother Nature and plant cover crops that nourish the soil while plants grow, depositing nitrogen, phosphorous and other vital minerals. Likewise, organic farmers allow these crops, once harvested, to compost into the soil, which adds extra nutrient density during their decomposition.

What’s more is that weed controls used on organic farms are also natural—minimizing weeds so that they don’t compete with crops for vital soil nutrients. This method, of course, requires more time and careful attention, such as tilling the soil well between every harvest and planting to ensure weed root systems are fully broken up. Additionally, an organic farmer rotates field crops, knowing that certain weeds are not able to grow with certain crops. He may also lay mulch or even a black tarp over his ground so that the sun will “bake” the weeds out of the soil.

By contrast, a conventional farmer’s goal is to entirely eliminate weeds from his field by applying powerful (and often toxic) chemical treatments.[vc_single_image image="8860" img_size="large" alignment="center"][vc_column_text]The same holds true for pest control. Conventional farmers apply various toxic pesticides to their crops. In fact, over one billion tons of pesticides are used on conventional U.S. crops each year, but those pesticides don’t necessarily work and they don’t stay just where they’re applied.

Cornell entomologist David Pimentel says, “It has been estimated that only 0.1% of applied pesticides reach the target pests, leaving the bulk of the pesticides (99.9%) to negatively impact the environment.”

On the other hand, organic farmers once again use nature to their advantage by using predatory insects, such as ladybugs, to eat the invaders that threaten food crops. Additionally, organic farmers find that crop rotation helps control pests on certain fields, but that planting companion crops can be even more powerful. For example, organic tomato farmers often plant organic garlic bulbs in their tomato fields to control aphids.

Then there are the topics of water and air—both precious, limited resources—and organic vs. conventional farming. Conventional farming and its chemicals severely pollute our water and air—threatening us and our earth in the process.[vc_column_text]Organic farming, however, seeks to stop pollution of our water and air, thereby preserving our planet’s resources. One way organic farmers do this is by planting crops indigenous to their region—crops that thrive in their natural climates, resulting in water use that fits their environment.

Organic farming also safeguards our environment and health now—and for future generations—but conventional farming does not. That leads us specifically to the topics of biodiversity and GMOs. In the last forty years, farming has gone from a competitive agri-business involving primarily small, family-owned farms with much biodiversity to an industry dominated by only a few pharmaceutical/chemical corporations—Monsanto, DuPont, Syngenta, Bayer, Dow and BASF—also known as the “Big Six” who have pushed genetically engineered (GE) seeds and crops as well as genetically modified (GM) foods on our world.

Unfortunetely, biodiversity continues to dwindle, even as farming operations consolidate and GE seeds become the standard. GE-seed-tailored herbicides are now sold as package deals to conventional farmers—and GE seeds often don’t regenerate from year to year, causing farmers’ dependency on to grow. Some estimates suggest that up to 80 percent of the land planted with major field crops in the U.S. now contains GE traits owned or licensed by Monsanto—a sure sign that biodiversity is disappearing.

Truth be told, scientists have observed that in the last 10 years, the earth has lost over 10 million species. GM seeds are designed to be aggressive, to multiply faster than organic seeds and to push out organic seeds when they compete for the same environment. The result? The other species become extinct in the GE seed’s wake, leading to much less biodiversity and many more GM crops.

In short, conventional farming is a perfect storm for environmental fallout, food insecurity and potential future complications. Negative impacts on the soil, air, water and biodiversity are also at great risk.

[vc_column css=".vc_custom_1502115543814{padding-right: 0px !important;padding-left: 0px !important;}"][vc_column_text]This information is intended for educational and informational purposes only. It should not be used in place of an individual consultation or examination or replace the advice of your health care professional and should not be relied upon to determine diagnosis or course of treatment.
#Organic , #Environment , #Farming