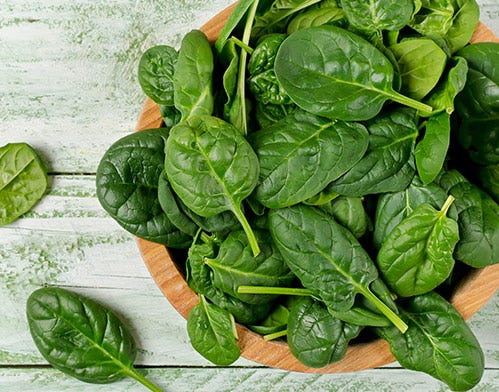 Spinach has so much green goodness in it that you just have to add it to your diet. Of course, spinach is super good for you cooked or raw, but just one cup of raw spinach gives you the following percentages of vitamins and minerals you need daily—the Daily Value, or DV:


And that’s just some of the nutrients you get in just one cup of raw spinach. Believe it or not, that cup of greens also provides you with B vitamins, vitamin E, potassium, zinc, fiber, protein and omega-3s.

There’s also a newer category of health-supporting nutrients found in spinach called glycoglycerolipids, which are found in the membranes of light-sensitive organs in most plants. They play a crucial role in plant photosynthesis, and recent research indicates strong health benefits of glycoglycerolipids.

Now for a few things to consider when selecting spinach.

First of all, make sure you choose Certified USDA Organic. Why? Because that means it’s free of prohibited pesticides, GMOs and more.

If you choose “regular” conventionally grown spinach, though, then you could also be consuming a host of pesticides. In fact, according to data from the USDA, there can be up to 54 pesticide residues—including known or probable carcinogens; hormone disruptors; neurotoxins; developmental or reproductive toxins and more—on conventional spinach.

As if those weren’t enough, there can also be up to 20 honeybee toxins found on non-organic spinach.

Not only is that not cool. It can also be hazardous to your health and to the health of our environment.

One more thing: make sure you get and consume vibrantly colored spinach. Research says it can have even more vitamin C than paler-colored spinach. That extra vitamin C is not only good for you, but it also helps protect health-boosting phytonutrients in the spinach—which also get to you when you consume it.