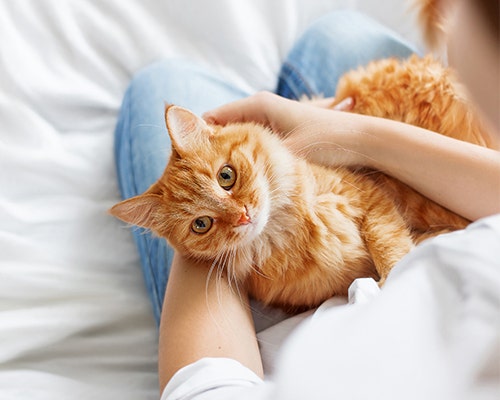 [vc_column css=".vc_custom_1521492158018{margin-top: -40px !important;padding-right: 0px !important;padding-left: 0px !important;}" el_id="body-content"][vc_column_text]As any pet owner knows, there are few things better than coming home after a long day and greeting our furry, hairy, feathered or even scaly pets! A recent survey by the American Pet Products Association found that 68% of U.S. households have at least one pet. While the vast majority own dogs and cats, the next most popular animals are fish, rabbits and turtles, followed by more exotic pets, according to the American Veterinary Medical Association. Regardless of the species, the benefits of pet ownership can extend past the companionship and enjoyment of caring for a pet. Research shows that there are many science-backed reasons why owning a pet can actually improve health!

Perhaps the most beneficial way that pets help improve health is by reducing their owner’s stress levels. A study published in Journal of Personality and Social Psychology found that pet owners have better overall well-being than non-pet owners. Further studies reviewed by the British Psychological Society found that dogs in particular promote therapeutic and psychological health, including lowering stress levels. A playful fish swimming can even help promote calm. Just being in the presence of an animal has been shown to have a calming effect, lowering cortisol levels and increasing oxytocin. Petting a dog or cat has been found to have the same stress-reducing effect—which also soothes the pet, according to experts from the Center for the Human-Animal Bond at Purdue University.

Having a dog is a guaranteed way to get more exercise each day, due to multiple required walks. Research shows that those walks can be effective for weight management. A study published in Preventative Medicine found that dog owners were 25% less likely to be obese than people without dogs. Cat owners too can benefit with some indoor exercise with their pet. Instead of leaving kitty to play with her own toys, shine a flashlight for her to “chase” while dancing or jumping rope. To build some muscle, tie a string or lightweight cat toy to handheld dumbbells. Each arm curl means a chance to play.

Reduced stress levels and increased levels of physical activity as a result of pet ownership both play a big part in helping lower the risk of heart disease. In addition, pet owners are said to have lower cholesterol and blood pressure levels. For these reasons, having a pet is associated with a reduced risk of heart disease, as supported by numerous studies from the American Heart Association. As reported by WebMD, cat owners even have fewer strokes, possibly because cats have an exceptionally calming effect on their owner.

Pets are known to provide so much unconditional love, promoting happiness in their owner. Research has found that spending time with a pet promotes serotonin, a known feel-good chemical for the brain, resulting in a positive effect on mood. This can be especially true for reducing loneliness in the elderly to help combat depression, as well as those who are sick or have physical limitations. As a result, many hospitals and nursing homes now use animal-assisted therapy on a regular basis.

Walking a dog is a great way to socialize and build confidence around new people, and may be one of the reasons why pet owners are said to be more extroverted. In addition, pet owners of all kinds are said to have increased self-esteem as compared to those studied without pets, as reported by the Journal of Personality and Social Psychology.

Pets provide a dual-fold relief for pain that plays on both psychological as well as physical aspects within the body. Caring for or simply spending time with a pet can provide a welcome distraction to pain that is very comforting. Engaging with an animal, especially petting or cuddling, releases the same pain-relieving endorphins as exercising. These endorphins interact with the brain’s receptors to reduce the perception of pain. A study by the Loyola University Chicago found that people who underwent joint replacement surgery used less pain medication when they received pet therapy.

Research has found that children exposed to a cat or dog in the home during the first year of life are less likely to develop allergies such as hay fever, asthma and eczema later on, as reported in a study published in Clinical & Experimental Allergy. Further, they have a higher tolerance for dander and other allergens as well. The same was found to be true for children who grow up around farm animals.

Even if you don’t think that pets can improve health, we all know they enrich our lives in so many ways. So, visit your local animal shelter and save a life—it could just be the best thing you ever did!