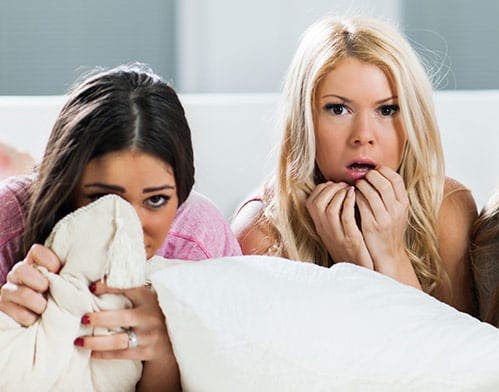 If you love scary movies, then you may want to listen up: the British Medical Journal (BMJ) recently published a paper out of Leiden University Medical Centre in the Netherlands, titled: “Bloodcurdling movies and measure of coagulation: fear factor crossover trial.” It’s newer research looking at the impact of fear on coagulation factors in the blood.

Now a bit of history—literally—on this. Since Medieval times, it has been hypothesized that acute fear can curdle the blood, hence the phrase “blood-curdling.” It’s an idea that fear physically affects the blood—one that is pervasive. In fact, the term “bloodcurdling” occurred in print in the mid-20th century, but dates back to the 1800s, meaning “arousing fright or horror.” Likewise, Germany has a phrase for it that means “freezes the blood in your veins,” while France also has a phrase for it, meaning “to freeze the blood.”

But does it really happen? That’s what the Netherlands scientists set out to find. First off, the premise is based in scientific fact because humans adapted a coagulation response in preparation for an attack—a response that could be life-saving if someone received a physical wound. In that scenario, quick blood coagulation or clotting can preserve a life.

Past studies, including one on bungee jumpers, have shown that experiencing intense anxiety appears to elevate certain coagulation factors in the blood. But these previous studies included participants with already-existing anxiety-based illness or those engaged in physical activities—which could include other factors making up the blood.

This study, however, is the first one to directly test coagulation factor changes in healthy individuals who experienced fear in the absence of exercise. The study involved 24 healthy volunteers with the oldest being age 30, and they were split into two groups. The first group saw a scary movie, and one week later, watched a non-scary educational movie. The second group viewed the movies in the reverse order—the educational movie followed by the scary movie.

Before and after each viewing, the study participants filled out a questionnaire, rating their fear levels and giving blood samples. The blood was then tested for various coagulation “fear factors,” including blood coagulant factor VIII, D-dimer, thrombin-antithrombin complexes and prothrombin.

But what is coagulant factor VIII and why is it significant? Coagulant factor VIII is an essential blood-clotting protein that activates in response to injury. Defects of it can lead to hemophilia, while high levels of it can lead to increased risk of deep vein thrombosis (DVT) and to pulmonary embolism. DVT occurs when a blood clot, or thrombus, forms in one or more of the deep veins in the body, usually the legs. A pulmonary embolism is a blood clot occurring in the lungs which can damage part of the lung due to restricted blood flow. It can also decrease oxygen levels in the blood or damage other organs. Large or multiple blood clots can be fatal.

So, what does all that mean? Overall, during the horror movie, coagulant factor VIII showed a mean increase of 11.1 IU/dL—an increase that could be clinically significant. Why? Previous studies point towards an increase of just 10 IU/dL producing a 17 percent increase in the risk of venous thrombosis—and 11.1 IU is above that threshold.

The researchers quickly point out the study’s limitations, but also say that the results can infer that when the human body is in a state of fear—from any source—certain blood-clotting factors are mobilized. And that could have unhealthy outcomes.
#Blood Health