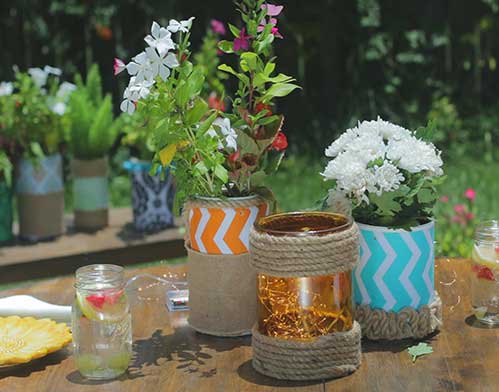 To put it in perspective, that amount of trash generated annually is enough to fill Busch Stadium from top to bottom twice a day for an entire year.

But do we have to throw everything out? No. We don’t. For many items, we can recycle, but enough of us aren’t taking advantage of recycling options.

The Environmental Protection Agency (EPA) estimates that 75 percent of the American trash trail is recyclable. However, we recycle only approximately 30 percent of it, so there’s definitely room for improvement.

Just set those bottles, jars or other containers aside, and once you’ve accumulated enough, send them in for recycling. By simply choosing to do that, you’ve made a difference.

You can even get creative with these containers and “upcycle” them—using them as flower pot planters to beautify your home or office. It’s so easy to do—and decorative, too!

First, take your empty containers (such as Garden of Life® protein containers or other containers), and remove the existing label.

Then, remove the lid (and top “lip” area of the container).

Next, measure the circumference and height of the container, and then use those measurements to cut some ornamental fabric to cover the container.

You'll then need to take glue and glue on the fabric, followed by accessorizing the container as you wish.

And, finally, fill the container with potting soil and then add a plant or flowers of your choice!

And . . . Voilà! You now have beautifully DIY upcycled flower pots.