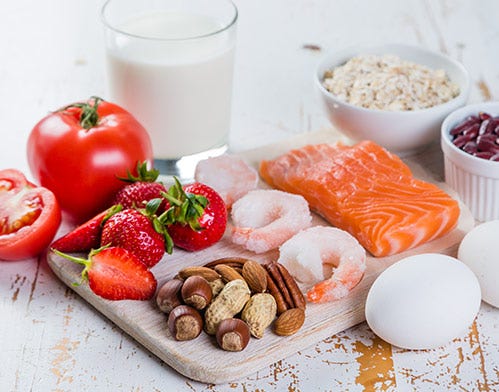 Food has become so much more than a nutritional necessity in today’s culture. It is a big part of special celebrations like birthdays and holidays, as well as everyday gatherings with family and friends. It provides a bonding experience and can be highly enjoyable. However, food can also be a major point of contention and loathed by those on a diet or with certain dietary restrictions, such as people with food allergies. Unfortunately, the latter group with allergies has continued to grow in recent years.

An estimated 15 million Americans suffer from food allergies, including almost 6 million children under the age of 18. This equates to about 1 in 13 children, or nearly 2 children in every classroom. The Centers for Disease Control & Prevention reported that between 1997 and 2011, food allergies in children increased by 50 percent. Fortunately, more awareness means more prevention of serious side effects, and restored enjoyment with eating!

What are the Most Common Food Allergies?

While any food could theoretically cause an allergy, just a few are known to trigger nearly 90% of allergic reactions to food, as reported by WebMD. These include:


An allergic reaction can happen within just minutes of eating, or it may happen hours later.

What are Symptoms of Food Allergies?

A food allergy is when the body’s natural defenses perceive exposure to a certain food as a threat, triggering an immune response to fight it known as an allergic reaction, according to WebMD. The provoking substance that causes a reaction is known as an allergen, and are most commonly some form of protein. The American College of Allergy, Asthma & Immunology reports that allergic reactions can be mild or severe, and symptoms may include:


More severe reactions and symptoms include:


The most serious allergic reaction is known as anaphylaxis, a potentially life-threatening reaction that sends the body into shock and requires emergency treatment.

While food allergy symptoms are most common in babies and children, they can appear at any age. They are also sometimes perplexing, as it is possible to develop an allergy to foods previously eaten for years with no problems, according to the American College of Allergy, Asthma & Immunology.

What the Difference between Food Intolerance vs. Food Allergies?

These phrases are often used interchangeably, but there is a distinct difference between food intolerance and food allergies. A food intolerance is generally a mild form of irritation or sensitivity to a certain food, such as gas after eating beans, diarrhea after dairy (lactose intolerance), or a headache after drinking wine. A food allergy, on the other hand, is actually triggered by the immune system, as the body mistakenly perceives the food as a threat and reacts to it, according to WebMD.

How to Prevent & Manage Food Allergies

Research published in the American Academy of Pediatrics suggests that feeding solid foods to very young babies could promote allergies. This might include mixing rice and cereals into infant formulas to make them thicker and heartier. Therefore, researchers recommend against introducing solid foods to babies less than 17 weeks old. They also suggest exclusively breast-feeding for as long as possible.

The National Institute for Allergy and Infectious Disease (NIAID) took special care to investigate the increasingly popular peanut allergy, creating guidelines to help identify moderate and high-risk infants for food allergy development. Infants at are the highest risk of developing peanut allergies when they already have severe eczema and/or egg allergies.

For older children and adults, the best way to help prevent food allergies is by learning to recognize mild to moderate food allergy symptoms, and avoiding the problem food(s) before the allergies have a chance to cause more severe symptoms. Allergy testing is also an option.

The good news is that children can outgrow allergies to milk, egg, soy and wheat, according to the American College of Allergy, Asthma & Immunology. Further, new research indicates that up to 25 percent of children may outgrow their peanut allergy, with slightly fewer expected to outgrow a tree nut allergy. Similarly, adults with milder allergies to certain foods may avoid the foods for years and later come to find that they can eat them again without reactions.
#Allergies