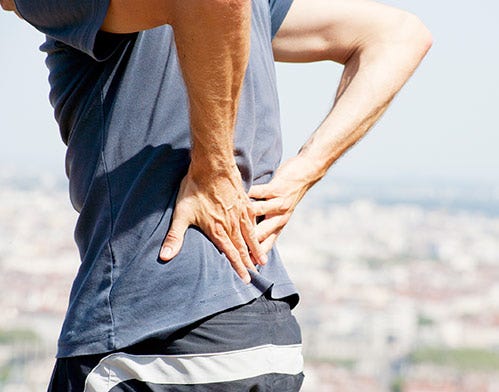 Low back pain is the second most common problem in the United States and is the most often cited reason for job-related disability, says the National Institutes of Health. For many with back pain, they’ve tried just about everything to alleviate their back discomfort, but now there’s some promising news. A study published in the Annals of Internal Medicine suggests that, in the short term, massage therapy might alleviate low back pain better than medicine, bed rest or exercise.

Here’s how the study, conducted by the Group Health Research Institute in Seattle, went. Four hundred people who had low back pain—most of whom were female with an average age of 46 years—were divided into groups. One group was given a series of relaxation massages. One group had structural massage. The other group encountered traditional care or medical interventions such as pain pills, bed rest, anti-inflammatory drugs, exercise, muscle relaxants or physical therapy.

Those in the relaxation massage and structural massage groups received one hour of massage therapy weekly for 10 weeks, while the others received traditional care over the same amount of time. After the 10 weeks, more than one-third of those who received massage therapy reported that their pain was either much improved or eliminated completely, but only one in 25 people in the traditional care group gave similar responses.

What’s more is that those in the massage groups were twice as likely to spend fewer days on bed rest, to use less pain pills and to participate in more activity than those in the other group. Additionally, the beneficial effects of the massage carried over for about six months. After a year, however, there were no noted differences among the test groups.

The healthful benefits of massage are nothing new because massage is a common alternative treatment for low back pain. Lead author of the study Daniel Cherkin, an epidemiologist with the Group Health Research Institute in Seattle, however, was somewhat taken aback to learn that structural massage didn’t outshine relaxation massage in pain relief.

Here’s why: structural massage is known for manipulating specific back pain-related muscles and ligaments, while relaxation massage focuses on body-wide relaxation. What didn’t surprise Cherkin, however, was that massage therapy was effective. “We tested this on people who had not been getting better from the usual medical approaches, Dr. Cherkin said. “If you’ve tried other things and you’re not getting adequate relief, then massage is a reasonable thing to try.”

While there are no concrete explanations as to why massage therapy can ease back pain, the results of this study prove hopeful. Dr. Richard Deyo, professor of evidence-based family medicine at Oregon Health and Science University in Portland, co-authored the study. He says, “Some patients are eager to avoid medications, injections, or surgery [for low back pain], and this may offer some relief.”

It’s important to note that while massage can often address muscular issues, many incidents of chronic low back pain are due to skeletal and nerve situations. Dr. Gunnar Andersson, an orthopedic surgeon at Rush-Presbyterian-St. Luke’s Medical Center in Chicago, says, “More likely the benefit [of massage therapy] is one of short-term decrease in pain and associated increase in function.

Andersson quickly adds, “If you can achieve a decrease in the use of medication by providing massage therapy, then I’m all in favor of that. A number of patients with chronic back pain today are, in my opinion, over-medicalized and are taking a large number of medications, some of which are narcotic and some of which have significant side effects and costs.”