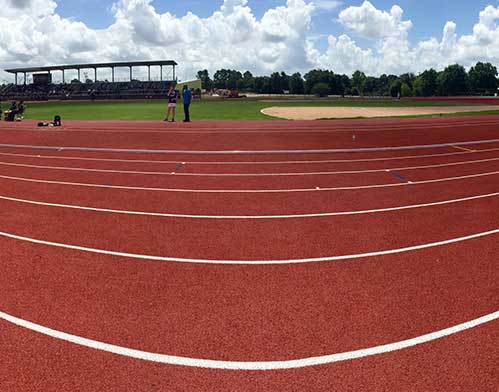 As a proud new sponsor of USA Track & Field (USATF), Garden of Life provided plenty of RAW Organic Protein powder and hundreds of protein bars to elite athletes at the USATF National Team Training Camp recently. Hosted by Prairie View A&M University, the event attracted spectators and media outlets from across the country, and we were happy to join them for a chance to see the most talented track and field stars in action!

With scorching temperatures in the high 90s, we noticed that very few athletes seemed to be having trouble with the relentless Texas heat wave. High jumpers sailed effortlessly over the bar, sprinters zoomed around the track in a blur and relay race practice went off without a hitch. We passed the Good Morning America crew conducting interviews in their tent and thought it might be a good idea if we found a shady spot as well. Luckily, we were welcomed into the trainers' tent where we watched as athletes received massages to alleviate cramping, icy towels, and Raw Organic Protein shakes and protein bars for recovery.

We were thrilled to see that as soon as athletes exited the track, they were handed a Garden of Life protein shake and a bar. Although we supplied Raw Organic Protein in chocolate and vanilla flavors, the USATF nutritionist told us that chocolate was the runaway favorite of most athletes at Training Camp. Because Garden of Life is the official protein powder, protein bar, and probiotics partner of USATF, we also supplied them with Dr. Formulated Fitbiotic packets.

As the afternoon progressed, a reporter suffered from heat exhaustion and was treated by local paramedics. We thought this was an opportune time to ask why Prairie View was chosen as the site for the training camp. Aretha Thurmond, a four-time Olympian and current USATF staff member, explained the site selection rationale.

"National Training Camps have been held in countries all over the world," she said. "The sites are always carefully chosen to simulate the environment and climate of where athletes will be traveling to global competitions."

We felt privileged watching the practice session for several hours. Later that evening, we were treated to a barbecue dinner in the new $60 million Prairie View A&M Athletic Complex overlooking the football stadium. As the athletes chowed down on ribs, beef brisket, chicken and peach cobbler, we had a chance to talk to several of them about their goals and upcoming competitions. We were also delighted to meet marathon runner John Nunn, an Olympian and self-professed "cookie monster" who said he had been making dozens of cookies with Raw Organic Protein and sharing them with his fellow USATF elite athletes.

"They taste great and everyone devours them," he said. "I'll be sure to send you the recipe!"