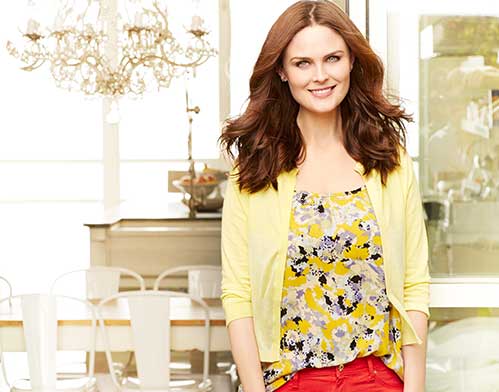 [vc_column css=".vc_custom_1501857463317{padding-right: 0px !important;padding-left: 0px !important;}"][vc_column_text el_id="text-content"]When Emily Deschanel casually tosses around words such as phalanges, manubrium and scapula, it’s because she’s learned a thing or two while playing Dr. Temperance Brennan on FOX Television’s longest-running comedy-drama, Bones. Entering its 11th season in October, the show is based on the career of forensic anthropologist and author Kathy Reichs, and premiered on September 13, 2005. After filming more than 200 episodes in a decade, her character, nicknamed “Bones,” has scrutinized enough skeletons to name nearly all of the 206 bones in the body. When we spoke with her recently, she was happily multitasking at home while feeding her two-month-old son in between interviews.

I've looked at a lot of gross, dead bodies on the show over the years,” Deschanel laughed. “I’m definitely more aware of the fact that there are a lot of things which are not good for your bones. For instance, if your body doesn’t get proper nutrition, it will actually leach what it needs from the bones and cause problems. Once, when I was filming a scene, my character was supposed to offer someone a soda to drink. I said we couldn’t do that because soda is not good for your bones!”

In real life, Deschanel’s ancestral bones trace back to French, Swiss, Dutch, English and Irish descent. Born in Los Angeles, the 39-year-old actress and producer is the daughter of Academy Award nominated cinematographer Caleb Deschanel and actress Mary Jo Deschanel, and bears a striking resemblance to her younger sister Zooey, the star of the comedy sitcom New Girl. After graduating from Boston University’s Professional Actors Training Program with a Bachelor of Fine Arts in Theater, she made her feature film debut in 1994 in It Could Happen to You. Following notable appearances in Cold Mountain, The Alamo and Glory Road, she was named one of “six actresses to watch” in 2004 by Interview Magazine. She won the lead role on Bones in 2005 and has been a hit with millions of fans ever since.[vc_column_text]On the show, Deschanel has a great relationship with co-star David Boreanaz, who plays her husband, FBI Agent Seeley Booth. The duo solve murders and unexplained deaths from clues gleaned from the victims’ skeletal remains, but it’s the dark comedy and affection between the two stars that set the show apart from similar crime shows. Off the set, life is much less dramatic for Deschanel, who is married to actor and writer David Hornsby and lives in Los Angeles with their two young sons. While raising a family and working can be daunting, she is committed to several causes and is an outspoken supporter of how vegetarian and vegan diets can help the environment. With the season premiere of Bones coming up in October, we talked to her about why she thinks the show has been successful for so long and how life has changed at home with a new baby.[vc_single_image image="11041" img_size="large" add_caption="yes" alignment="center" onclick="link_image"][vc_column_text]Extraordinary Health Magazine:  Congratulations on the recent birth of your second child! How does life change with a two-month-old?

Emily Deschanel:  It changes a lot. The balancing act you do with one child and working is multiplied by about 50 times! I’m breast-feeding, so I’m trying to schedule that every two hours during the work day. There are a lot of new challenges, but I don’t mind. My son is so cute!

Extraordinary Health Magazine:  Is there such a thing as achieving balance with your career, motherhood, marriage and your personal interests? Do you have any tips for others striving to do this?[vc_column_text]Emily Deschanel:  I’ve realized that you simply can’t do everything, at least not every day. For instance, maybe you can’t exercise one day because you need more time with your kids. When I’m not able to be with my sons, I like to leave some reminders for them. I write notes to my oldest son, Henry, and put them in his lunchbox, or I’ll leave a note for him to find near his bed when he wakes up so he’ll know that I’m thinking about him.

Extraordinary Health Magazine:  You’ve been a vegan for most of your life. Are you raising your kids vegan?

Emily Deschanel:  They are not 100 percent vegan, and neither is my husband. The kids are about 99 percent vegan, and that’s because I let them eat eggs occasionally with their dad. I think it’s a great way to feed your babies. Henry loves veggies, and he’s totally into it. Someone gave him candy at a party not long ago and he asked, “Why did they give this to me? I don’t eat candy!” So, I’m really proud of him because nutrition is important to me, and I love it when I have these victories. I know it can sometimes be tricky to feed kids, but I openly offer healthy vegan options and cultured vegetables to them all the time.

Extraordinary Health Magazine:  Describe your diet for us. What are your favorite foods?

Emily Deschanel:  I have a very alkaline diet. I love to drink green juices and eat lots of salads. I also like to make a habit of eating as many different colors of vegetables as I can. As for treats, of course, there’s fruit and you can even get vegan chocolate. For Easter, I buy little chocolate vegan bunnies and give them to everyone.

Extraordinary Health Magazine:  What other things do you do to stay healthy?

Emily Deschanel:  I don’t sit a lot. I try to stand or walk more because it’s so much better than sitting around. During the day, I’ll do little bursts of exercise such as 30 squats, and then I’ll try to keep moving all day long. I’ve learned it’s not good to avoid exercising entirely just because you don’t have time for a full workout at the gym that day. I focus on getting in a few minutes of exercise here and there when I can![vc_single_image image="11044" img_size="large" add_caption="yes" alignment="center" onclick="link_image"][vc_column_text]Extraordinary Health Magazine:  Can you tell us about your involvement with the Farm Sanctuary and why it’s important to you?

Emily Deschanel:  I’ve been a fan of the organization for years and joined their board about a year ago. Everything started when I decided to become vegan 22 years ago after visiting their sanctuary in New York. It was life-changing to see animals growing up in a healthy environment. I like to take Henry so that he can experience these animals and see that the y have their own personalities—even the chickens! It’s very eye-opening to go there because they also do a great job of educating about t he dangers of factory farms and where our food comes from.

Extraordinary Health Magazine:  Do you believe leading a vegetarian or vegan lifestyle can help save the planet?

Emily Deschanel:  Absolutely. Some people don’t seem to realize that factory farms do more harm to the environment than all of our transportation vehicles combined. There are a lot of discussions about the importance of fuelefficient vehicles, but people can do more for the earth by becoming vegan.

Extraordinary Health Magazine:  Bones is one of the longest-running shows on television. Why do you think the show has resonated with audiences for so long?

Emily Deschanel:  I believe it’s because it’s not just a procedural show. The tone changes all the time and people are really interested in the characters. I can think of several other shows that are more focused on solving the crime instead of the people who are solving it. Bones is fun to watch because people fall in love, break up and experience difficulties, but it also has a lightness to it. Sometimes, it seems like an action thriller, while other times it feels more like a comedy with a few dead bodies thrown in!

Extraordinary Health Magazine:  Do you watch other crime shows at home?