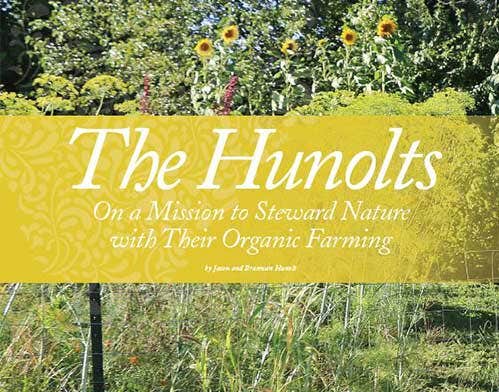 Here we are, at the waning of our first winter on the Hunolt family homestead. Most people might think that the winter months bring to a close the work necessary to maintain food production, but that couldn’t be further from the truth. In fact, people unfamiliar with the production of food and medicinal herbs might not realize “harvest” is a year-round occurrence, especially if you have a hothouse. There is certainly more activity in the spring, summer and fall, but winter is not lifeless.

Winter is especially a time to make ideas, plan and research before all of the spring activity. We have spent a great deal of time building a large cold frame (which allowed us to overwinter kale), planning and scheming, purchasing plants, doing maintenance and even taking classes on beekeeping![vc_single_image image="10930" img_size="large" alignment="center" onclick="link_image"][vc_column_text]We value the prospect of beekeeping not only to help preserve and, hopefully, multiply bee populations, but also for the wondrous things bees make: honey, royal jelly, bee pollen, propolis and wax.

Honey is a very well-known food—used for everything from sandwiches to desserts, even making alcohol preparations such as mead. But many people are unfamiliar with one of honey’s foremost applications: a topical medicine for wounds. The Egyptians and many folk herbalists today use honey for its anaerobic property which, when applied to an open wound, doesn’t allow for infection to take place as it cannot manifest without oxygen. In fact, this is only one facet of its antimicrobial function.

As for the other hive products, royal jelly is a substance created solely to rear a queen and is attributed for her great size. Bee pollen is often valued as an aid for supporting allergies, energy and general well-being. Propolis is a very powerful resinous material produced from the early buds of trees and other plant materials which bees use to not only coat, seal and repair the hive, but also to enclose the bodies of hive invaders they kill and cannot remove, such as a large mouse or snake. This helps ensure a sterile environment to keep the hive healthy.

Propolis is valued as an extremely powerful antiviral and antiseptic. Because of this, many cultures use it to fight off illness and to dress wounds, even though it is tricky and sticky to work with. Bee wax is useful for candles, but since we’re herbalists, we also value it for its role in salve making.

Finally, with all the food-bearing plants we are growing, it will be helpful to have a local source of pollinators. While it might seem we know a thing or two about bees, we really don’t know much more than anyone else when it comes to caring for them— hence, the importance of the class.[vc_single_image image="10929" img_size="large" add_caption="yes" alignment="center"][vc_column_text]As of this writing near the end of February, we began harvesting sap for a popular winter staple: maple syrup. The rising sap of sugar maple trees in late winter is collected and boiled down to make syrup and sugar.

Today, most sugaring operations boil the sap down to syrup as it comes in. Indigenous peoples had a method of making maple products slightly different: when possible, they would let collected sap freeze across the top, then discard the ice.

The sugars would naturally precipitate towards the bottom. This meant there was less water to boil off, and it saved both boiling time and fuel. We are going to try out this method this year.

We purchased a variety of fruiting trees and shrubs and await their arrival when the weather warms. There will be American persimmon, paw paws, tart cherry, sea buckthorn (omega-7 source), Ohio native plum, filberts and a few more we can’t remember! The idea is to create multiple growing tiers throughout the homestead, placing plants where they would naturally grow: for example, Paw Paw trees grow under the forest canopy and prefer dappled sunlight, while berries prefer hedgerows Our berries will include black raspberry (highest natural-occurring source of ellagic acid), red raspberry, blackberry, Saskatoon berry, blueberry and a few different types of strawberries. These long-lived perennial plants will take some years before they bear significant amounts of fruit, but it is well worth the wait.

We will be starting our plants for our vegetable garden from seed in the near future. Late February and early March is when many sow seeds for plants that they will later transplant to their garden, especially those that like heat and are slow to get going, such as peppers. Cold weather plants can be direct-sown in the early, chilly spring as they like it best and need those temperatures.

We are happy to announce every one of our chickens happily and healthily made it through the coldest days of Ohio’s classically frigid winter, but ol’ Roo did get a touch of frostbite on his comb. We were a little surprised by just how many eggs we collected over the cold and dark winter months! There were quite a few and the numbers are ever-increasing as the days lengthen. The chickens have also fulfilled their other job admirably—contributing to compost-making with all their manure! It’s a good thing, because we need a lot of it.