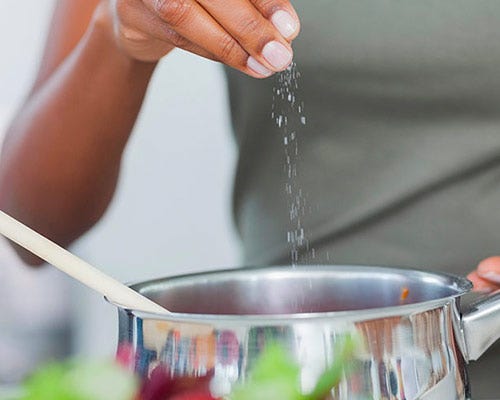 While most restaurants still have salt and pepper shakers on their tables, the salt in particular has likely gotten less use over the years, as the dangers of salt continue to unfold. From the American Heart Association to the Harvard School of Public Health, medical experts and researchers warn of the ill effects salt can have on the body. From stiffening blood vessels, increasing high blood pressure and possibly even leading to heart attack and stroke, excessive sodium intake can cause serious damage. Experts say that sodium raises blood pressure because it causes fluid retention in the body, creating added burden to the heart. Besides taxing the heart, a Canadian study even found that high-sodium diets were linked to cognitive decline.

While sodium is considered an essential nutrient, very little is actually needed to help perform bodily functions. Healthy levels of sodium control fluid balance in the body and maintain proper functioning of muscles and nerves, according to MedlinePlus. As a result, the body instinctually craves salt—however, the vast majority of people consume salt in great excess. The National Institutes of Health (NIH) recommends for the average adult to consume between 1,500 milligrams to 2,400 milligrams of sodium daily—or about 1 teaspoon. The average American consumes double that amount!

As salt can be so tasty and add a lot of flavor to otherwise bland foods, it can be extremely hard to cut back. While many people claim to be “sugar fiends,” research suggests that salt can cause just as strong cravings. A study published in the journal Medical Hypothesis says that neurological mechanisms in the brain can cause addiction to certain foods, including those high in salt. Salt may also stimulate the pleasure and reward center in the brain, much like sugar does.

However, for those looking to cut back on their sodium intake, it may require a little more effort than cutting back on sugar. The CDC estimates that 75% of all sodium Americans consume actually comes from salt added to processed foods. From restaurant meals to packaged goods with sodium additives, it can be hard to avoid consuming salt that is prevalent in many everyday foods.

Many people are familiar with the “Dirty Dozen”, also known as the produce list with the highest level of pesticide contamination. However, fewer people are familiar with the “Salty Six” – the popular foods with very high levels of sodium. The list from the American Heart Association may have some surprises, but since too much salt in the diet can pose serious health risks, it’s important to consider dietary intake. The list includes bread and rolls, cold cuts and cured meats, pizza, poultry, soup and sandwiches.

Fortunately, there are many ways to still indulge in these favorite foods. Bread is often consumed multiple times a day in different meals, so while each serving might not amount to much sodium, collectively the consumption can add up. Checking labels on breakfast staples like English muffins and toast can help cut back on excess salt. Cold cuts and meats are often packed with up to half a day’s worth of recommended sodium, so be sure to look for reduced sodium varieties. Limiting cheese and salty toppings can help cut back on sodium while still enjoying an occasional slice of pizza. Sodium levels in poultry vary greatly based on preparation, so choose wisely. Soup can pack a wallop of sodium per serving—sometimes up to 1,000 milligrams in a single-serving can! Making soup from scratch can be tedious, but if a low-sodium variety isn’t available, it is the safest bet. Fast-food sandwiches and burgers are other salt-laden foods. Opting for half a sandwich with a salad can help satisfy junk food cravings while limiting salt. When it’s just not possible to cut out a favorite restaurant, opting for a smaller portion will allow a little indulgence with less salt.

While it can take some discipline to cut back on salty favorites and to start double-checking food labels, reducing salt intake can greatly help maintain health. Eating more whole, unprocessed foods such as organic vegetables and grass-fed meats is really the best way to avoid salt overload. So think; more organic whole foods and much, much less of the “Salty Six!”
#brain health , #Blood Health , #heart health , #Healthy Eating